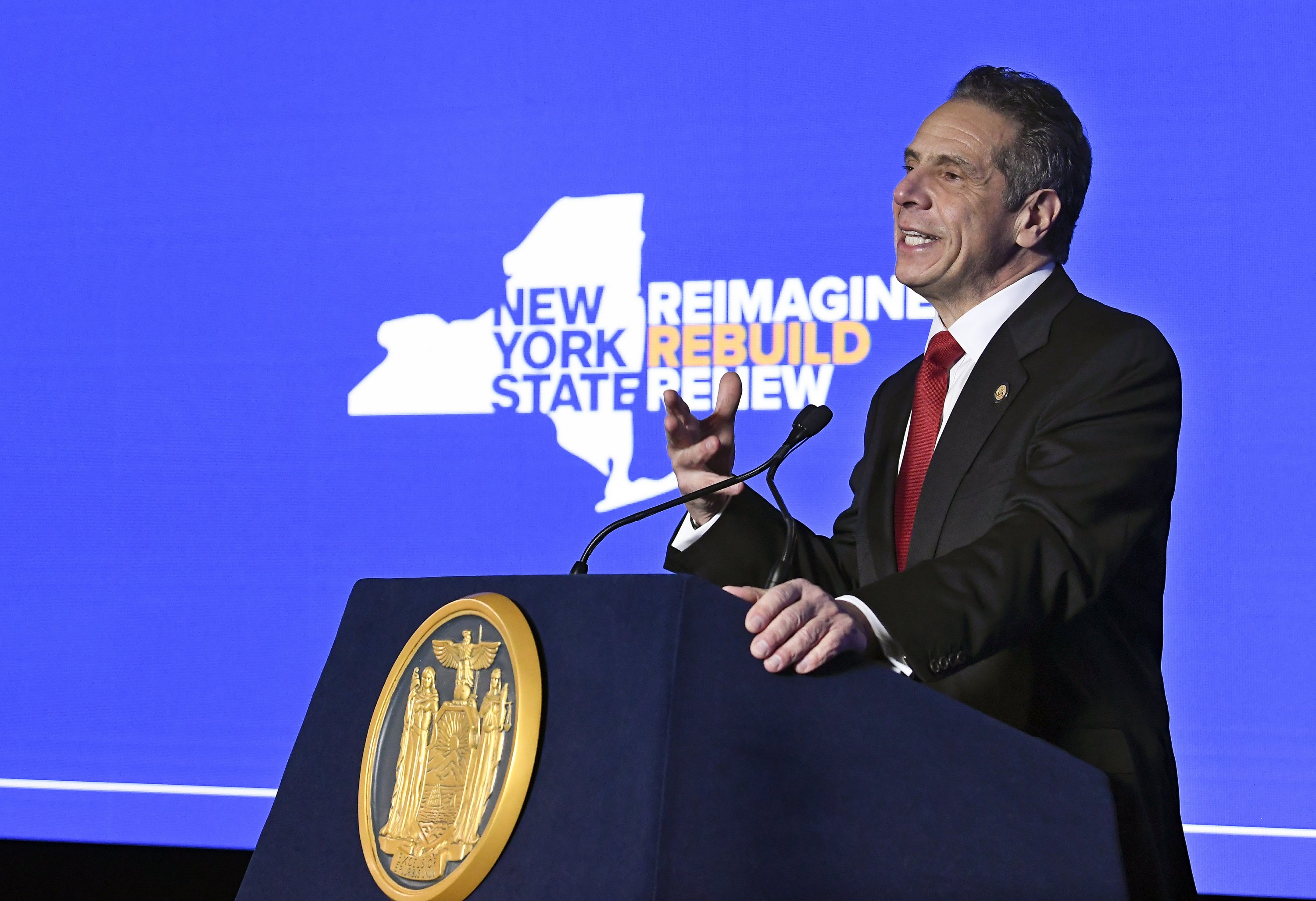 ALBANY, N.Y. (AP) — Gov. Andrew Cuomo pledged New York will vaccinate millions and jumpstart its flagging economy in 2021 as part of his annual address to the state that began Monday.

The governor’s address — which will continue throughout the week — comes as the state tries to balance reopening its economy with ending a pandemic whose death toll is now nearing 40,000 people, according to data collected by the John Hopkins University School of Medicine. New York’s hospitals and nursing homes have recorded nearly 4,100 new deaths of people with COVID-19 over the past 30 days, and the state is now seeing more new COVID-19 cases per-capita than 35 other states.

Hospitals statewide have added thousands of additional emergency beds and are now caring for about 8,500 patients — less than half the mid-April peak of 18,000. But Cuomo warned continued spread — potentially exacerbated by a highly contagious COVID-19 variant widespread in the United Kingdom — could devastate hospitals around the state.

“We are hurt, we are frustrated, we are in mourning, we are anxious,” said Cuomo, who delivered his televised address to a small in-person audience. “We are shocked that an invisible enemy could reach such death and destruction especially in this, the most wealthy and powerful nation on earth.”

The Democrat opened up vaccine eligibility to essential workers and individuals over 75 years old in a Friday announcement — a shift that followed criticism of his restrictive approach of first waiting to vaccinate all healthcare workers.

The governor announced he’s launching a new public health corps that will bring aboard 1,000 fellows to help roll out vaccinations. He also pointed to a new state website launched Monday that allows New Yorkers to check their eligibility and find out where they can sign up for a vaccine.

Cuomo called on the federal government to boost shipments to states and urged the incoming Biden administration to release more doses. New York has used just half of its roughly one million vaccine doses so far, and Cuomo said New York won’t have enough doses for roughly four million eligible New Yorkers until mid-April, based on the state’s federal allotment of 300,000 vaccines per week.

The pandemic is still hitting large swaths of the state: about 136,000 people have tested positive for COVID-19 since Jan. 1 alone, while nearly 8,900 new COVID-19 patients have entered hospitals. The governor has set high standards for new restrictions on businesses and houses of worship in hard-hit areas of New York that could only kick in once hospitals are nearing crisis capacity levels, and is urging the state to emphasize boosting its ailing economy.

Cuomo pledged to invest in green energy to help create more jobs, and to increase revenue by legalizing mobile sports betting and recreational marijuana, which could bring in $300 million years in annual revenue after several years.

New York lawmakers and Cuomo have planned to reduce state spending by as much as $8 billion to make up for the state’s expected large drop in sales and income tax revenue.

And Cuomo has held back at least $2.4 billion in state payments to localities as of September: that includes $486 million in aid to higher education, $475 million for transportation, $289 million in health care, $252 million for human services and housing, $300 million in school aid and $362 million in education and arts funding.

It’s unclear whether the state will ever pay out that local aid.

Cuomo said it’s up to Congress to provide enough federal aid, and said he’s hopeful that the newly Democratic-led Senate will provide enough state and local aid to help with state-level shortfalls.

“I believe they will do justice,” he said.

But he’s facing pressure from Democratic legislative leaders and the party’s left wing to increase taxes for the state’s wealthiest rather than rely on potentially sweeping budget cuts or federal aid.

“It is urgent and necessary that our representatives in Washington bring home relief,” New York Working Families Party State Director Sochie Nnaemeka said. “But federal relief never was, and is not today, sufficient to meet the needs of people up and down our state.”