According to Zacks, “TripAdvisor is being hurt by COVID-19-induced travel bans. Also, weaker-than-expected revenues from the Hotels, Media & Platform segment have been impacting the company’s performance. We note that this particular segment accounts for majority of the total revenues but ongoing challenges in it are hurting the top-line growth. Nevertheless, the company’s focus on new initiatives and improving Experiences & Dining segment remain positives. Further, its expanding footprint in the international restaurant reservation space and improved cost-control methods are tailwinds. However, ongoing challenges faced by the segment remain a concern. Weakness in TripAdvisor’s Other segment is also a concern. Furthermore, mounting marketing expenses are a risk. Notably, the stock has underperformed the industry in the past year.”

TripAdvisor (NASDAQ:TRIP) last issued its earnings results on Thursday, November 5th. The travel company reported ($0.17) earnings per share for the quarter, beating the consensus estimate of ($0.42) by $0.25. TripAdvisor had a negative net margin of 9.45% and a negative return on equity of 4.61%. The business had revenue of $151.00 million for the quarter, compared to analyst estimates of $146.33 million. During the same period in the previous year, the business earned $0.58 EPS. The firm’s revenue was down 64.7% on a year-over-year basis. As a group, equities research analysts anticipate that TripAdvisor will post -1.62 earnings per share for the current year.

In related news, SVP Seth J. Kalvert sold 18,975 shares of the business’s stock in a transaction that occurred on Monday, December 21st. The shares were sold at an average price of $25.69, for a total transaction of $487,467.75. Following the completion of the transaction, the senior vice president now owns 34,098 shares in the company, valued at $875,977.62. The sale was disclosed in a filing with the SEC, which can be accessed through the SEC website. 3.50% of the stock is currently owned by insiders.

TripAdvisor, Inc operates as an online travel company. It operates in two segments, Hotels, Media & Platform; and Experiences & Dining. The company operates TripAdvisor-branded Websites, including tripadvisor.com in the United States; and localized versions of the Website in 48 markets and 28 languages. 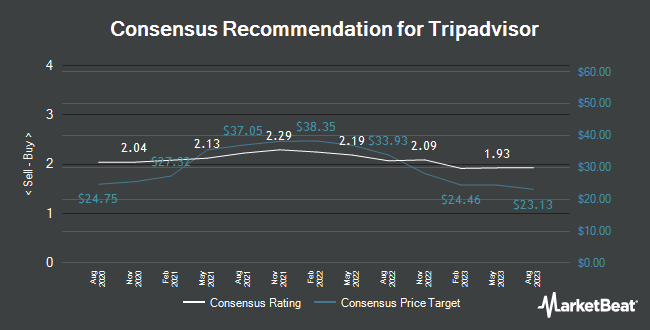 Is the stock market open on Martin Luther King Jr. Day? Here are the trading hours