President-elect Joe Biden is avoiding taking a firm position on removing President Trump from office ahead after last week’s Capitol riot, as House Democrats signaled they would introduce articles of impeachment against him on Monday.

Democratic Reps. Ted Lieu, David Cicilline, and Jamie Raskin drafted the article of impeachment, “Incitement to Insurrection,” which they plan to introduce in a House pro forma session on Monday.

“With every new day we learn that the violent insurrection was even worse than we thought. Impeaching @POTUS would be just the bare minimum of what needs to occur,” Lieu tweeted. “Donald Trump should be prosecuted for a range of felonies, including inciting an insurrection and felony murder.”

Biden, over the weekend, said that Trump is “not above the law,” saying that “justice serves the people — it doesn’t protect the powerful.”

But the president-elect has stopped short of outright calling for Trump’s impeachment or for Vice President Mike Pence and the Trump Cabinet to invoke the 25th Amendment.

WHAT IS THE 25TH AMENDMENT AND HOW DOES IT WORK?

When asked whether he supported bringing articles of impeachment, or invoking the 25th, which both House Speaker Nancy Pelosi, D-Calif., and Senate Democratic Leader Chuck Schumer, D-N.Y., have called for, Biden said it was up to Congress to decide.

“I’m focused on the virus, the vaccine and economic growth. What Congress decides to do is for them to decide,” Biden said. “We’re going to do our job and the Congress can decide how to proceed with theirs.”

He added: “That’s a decision for the Congress to make. I am focused on my job.” 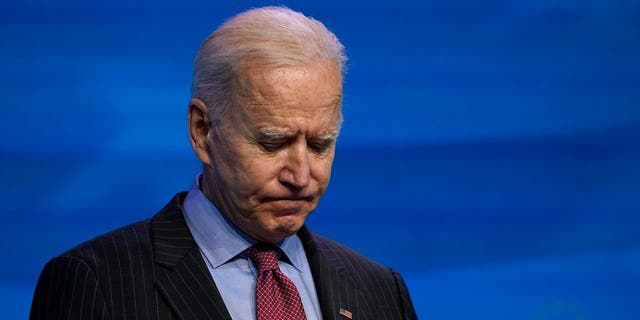 In this Jan. 8, 2021, file photo President-elect Joe Biden speaks during an event at The Queen theater in Wilmington, Del. (AP Photo/Susan Walsh, File)

Biden, though, said that he has “been saying for now well over a year that he’s not fit to serve,” calling Trump “one of the most incompetent presidents in the history of the United States of America.”

Biden emphasized that “it’s important to get on with the business of getting him out of office,” but he said “the quickest way that that will happen is us being sworn in on the 20th. What action happens before or after that is a judgment for the Congress to make.”

Biden’s comments came as the Democrat-controlled House reached more than 200 co-sponsors for an article of impeachment against Trump, which they plan to introduce Monday. There are 222 Democrats in the House.

“It is the hope of members that the president will immediately resign,” Pelosi said in a statement Saturday after an hourslong phone call with Democrats on impeachment. “But if he does not, I have instructed the Rules Committee to be prepared.”

It’s unlikely that impeachment would make it through both the House and the Senate by Jan. 20, when President-elect Biden is inaugurated.

ARTICLE OF IMPEACHMENT AGAINST TRUMP TO BE INTRODUCED MONDAY

Rep. Adam Kinzinger, R-Ill., has called for Trump to be removed through the 25th Amendment, the first GOP member of the House to publicly do so. Meanwhile, frequent Trump critic Sen. Ben Sasse, R-Neb., has said he would “definitely consider” impeachment articles if they were brought forth.

Sen. Lisa Murkowski, R-Alaska, became the first Republican to call on the president to resign Friday, and said Trump’s leadership of the GOP leaves her questioning whether to remain in the party.

“I want him to resign. I want him out. He has caused enough damage,” Murkowski said in an interview with the Anchorage Daily News.

Meanwhile, Schumer and other Democrats have urged Pence to “immediately” invoke the 25th Amendment, calling it the “quickest and most effective way” to remove Trump from office.

Schumer, though, warned that if Pence and the Cabinet did not take that path, Congress could “reconvene to impeach the president.”

The 25th Amendment includes a section allowing the vice president and a majority of Cabinet members to declare a president “unable” to perform the job.

A senior Trump administration official told Fox News that Pence has not been involved in any 25th Amendment conversations.

The calls for Trump’s removal come after the president spoke at a rally Wednesday, telling supporters that he would “never concede,” and repeated unsubstantiated claims that the election was “stolen” from him and that he won in a “landslide.”

During his remarks, he renewed pressure on Pence, claiming that he should decertify the results of the presidential election and send it “back to the states,” claiming that if he did that, Trump would be president for another four years.

Trump’s remarks came ahead of a joint session of Congress to certify the results of the presidential election. As members of the House and Senate raised objections to certain electoral votes, both chambers called for a recess and left their chambers as pro-Trump protesters breached the Capitol building.

Washington, D.C., police said the security breach at the Capitol resulted in four deaths – including a woman who had been shot inside the building – and at least 70 arrests.

MURKOWSKI CALLS ON TRUMP TO RESIGN, QUESTIONS HER FUTURE WITH GOP

White House deputy chief of staff Dan Scavino posted a statement from the president on Twitter early Thursday morning, saying: “Even though I totally disagree with the outcome of the election, and the facts bear me out, nevertheless there will be an orderly transition on January 20th.”

“I have always said we would continue our fight to ensure that only legal votes were counted,” Trump said. “While this represents the end of the greatest first term in presidential history, it’s only the beginning of our fight to Make America Great Again!”

The House voted to impeach Trump in December 2019, but the Senate acquitted him on both articles of impeachment – abuse of power and obstruction of Congress – in February 2020.

The House impeachment inquiry began after the president, during a phone call in July 2019, pressed Ukrainian President Volodymyr Zelensky, to look into Biden’s role pressing for the ouster of a Ukrainian prosecutor who had been investigating the founder of Burisma Holdings – a Ukrainian natural gas firm where his son, Hunter, sat on the board.

Trump’s pressure campaign against Ukraine prompted a whistleblower complaint, and, in turn, the impeachment inquiry.

The president’s request came after millions in U.S. military aid to Ukraine had been frozen, which Democrats cited as a quid pro quo arrangement.

Guardsmen stationed at U.S. Capitol building to get cots

Where's your $600 stimulus check? Tips to track it down with the Get My Payment app

Guardsmen stationed at U.S. Capitol building to get cots

Where's your $600 stimulus check? Tips to track it down with the Get My Payment app