What does the Democratic sweep actually mean for investors? We spoke to 5 investing experts to find out how to make the most of Biden's blue Congress 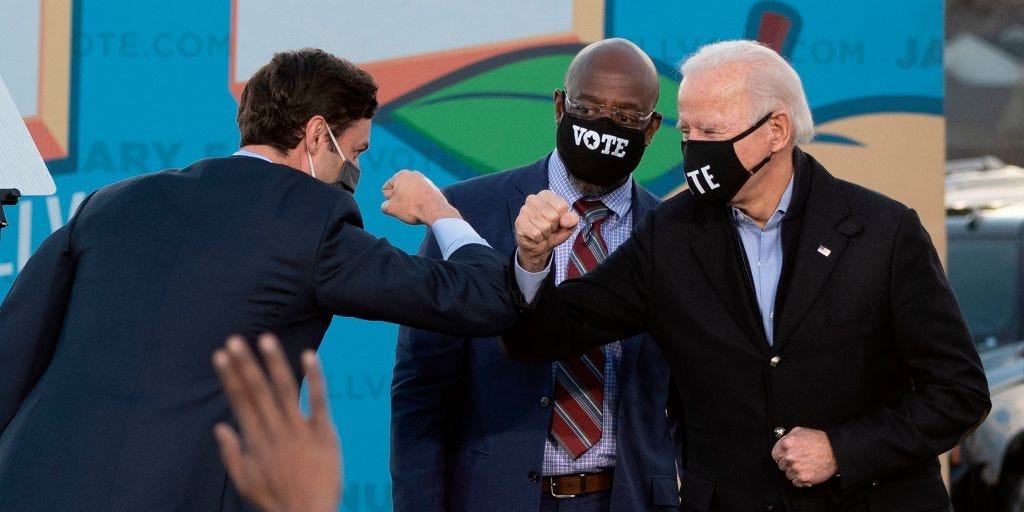 Markets largely reacted positively, despite a small decline in Big Tech stocks, with the Dow Jones hitting a record high, and a sell-off in Treasuries as investors forecasted a boosted economic growth.

Although the wins take a little pressure off Biden’s first two years, and a reduced risk of a reluctant Senate refusing to pass additional stimulus to boost the economy should it be needed , i.e. a new virus variant or slow vaccine inoculations, said Andrew Sheets, Chief Cross-Asset Strategist for Morgan Stanley.

But, the margins are razor thin and cannot be taken for granted, nor can it be treated the same as a ‘Blue Wave,’ according to several leading investment firms.

If anything, the new Senate majority is a win for the centrist Democrats, not progressives, argues Olga Bitel, Global Strategist at William Blair Investment Management, which oversees $61.7 billion.

“The real center of gravity in the US Congress has shifted toward centrist Democrats. They are likely to represent the biggest constraint on Biden’s policy agenda,” she added.

With the narrow nature of the Democratic majority in both chambers, it doesn’t leave much opportunity for the other sweeping, progressive reforms Biden ran on, meaning there will be a focus on the “easy” stuff, like more direct support to households, Sheets said, as opposed to the more divisive policy actions like tax code changes.

“The harder, more controversial things are just simply off the table; the majorities in both the House and the Senate are so narrow that they’re not even worth exploring,” he added.

Ultimately, there will be a stimulatory package, but Biden will have to spend more than he can tax, said Edward Smith, Head of Asset Allocation research at Rathbones, which oversees $50.5 bln in AUM, meaning Biden is still dependent on bipartisan support.

One example of a widely popular package would be infrastructure spending, “probably focusing on transportation or green transportation, and I think the Republicans could get on board with that,” Smith added.

However, this would be a focus in the second half of 2021 at the earliest, and even then, with the need for bipartisanship, it may take longer to pass, according to a note by PIMCO on Friday, including head of US public policy Libby Cantrill.

The package would include national broadband network, green energy, and school investment which has “the potential to have more lasting economic benefits than targeted aid, and could increase productivity (and maybe inflation) in the longer run. Infrastructure and related spending would likely be in the range of $1 trillion – $2 trillion (4.5%–9% of GDP), most likely spread out over several years,” the note said.

What does this mean for markets and how should you position?

The most obvious takeaway from this broad analysis is that with higher stimulus and the prospect of more growth next year – the treasury curve is set to steepen.

“The Dem government sweep materially increases scope for more fiscal stimulus and affirmed many of our pre-existing US views including higher rates, a steeper curve, and wider longer-dated breakevens,” Mark Cubana, Head of US Rates Strategy at Global Research at BofA, wrote in a note published Friday.

Most institutions are expecting a gradual, but nonetheless significant, curve steepening, with Morgan Stanley estimating that the 10-year US Treasury will hit the 1.5% level by the end of 2021, Sheets said.

“Anything above 1.5% – 2.0% on the 10-year Treasury yield would elicit Fed action,” said Jeff Mills, Chief Investment Officer of Bryn Mawr Trust, which oversees $17.24 billion in AUM.

A rate increase of this magnitude shouldn’t be too much of a threat to the US stock market, Sheets noted, but a rate increase will nevertheless have implications.

With the steeper yield curve, it is time to consider moving away from the most expensive growth names; instead, moving towards the middle, Smith said.

“If you’re moving into a different rate regime, maybe leadership within the market goes through a larger shift, and so it kind of nets out to less of an impact at the overall market level, but it’s a bigger impact under the surface,” Sheets said.

In the US this means tilting towards mid and small cap companies, as well as more cyclically-oriented areas of the market that carry more reasonable valuations, Mills echoed. Cyclical, or value stocks, are those that are closely linked to the health of the economy, conventionally performing well when there is GDP growth.

Notably, with US markets under-served by value assets, State-side investors may want to look to Europe for opportunities, Sheets said.

However, one obvious contender on both sides of the Atlantic is the financial sector, which was savagely sold-off during the coronavirus crisis, taking huge discounts to valuations last year. But now a solid play on any increased growth, Sheets said.

Higher interest rates will allow banks to increase borrowing costs, which is how they make their money and with the possibility of dividends restarting in Europe, this could be very attractive.

Another trade on growth comes from copper, Sheets said, adding that it offers “a way to play a more inflationary, growth-sensitive metal against, I would say, a more defensive metal.”

The bear is always there

Sadly, as with all things, it’s not all good news.

The most obvious risk to investors is that valuations are very high, meaning any issues with the vaccine rollout, or the virus in general, might lead to a recalibration of the optimistic forecasts priced into financial assets, Mills said.

Secondly, with the sheer amount of money being thrown at markets must go somewhere, and if rates increase too fast, there are real risks.

“Although not our base case, rapidly rising inflation is also a risk.  Any time you have M2 money supply growing at 25% year over year, one must consider the possibility of rapidly rising inflation.  If inflation begins to rise too quickly, investors may begin to anticipate changes to monetary policy, which would put current valuation multiples at risk,” Mills said.

Lastly, regulation could be on the horizon, especially in the financial sector and this could present long-term headwinds, Smith said.

“We don’t like financials over the long term because what accompanies financial repression? A hell of a lot of regulation and possibly forcing banks to hold more government bonds as well,” he added.

The 2022 appointment of the Fed chairman exacerbates this risk, he said, arguing that Jerome Powell is likely to be replaced by Lael Brainard, one of the Fed’s current governors and a reknown policy dove who will be more inclined to leave monetary policy looser for longer.

“She is all about regulation…  and [Treasury Secretary nominee] Yellen is pretty on board with that as well. So I think that’s why – over the long term – we don’t love financials,” he said.