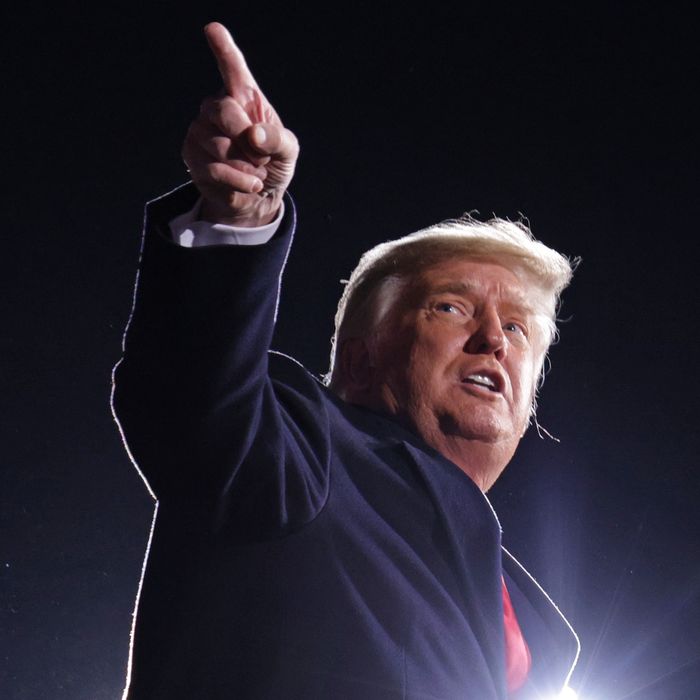 President Trump devoted much of his speech at a rally in Georgia on Monday to repeating baseless voter-fraud claims and attacking the state officials who refused to help him overturn the election. Photo: Alex Wong/Getty Images

President Trump made a second, earlier call to attempt to pressure a Georgia election official to help him overturn Joe Biden’s narrow victory in the state, the Washington Post confirmed on Saturday. The call, to the state government’s lead elections investigator, happened on December 23, less than a week and a half before Trump’s now infamous, recorded attempt to convince Georgia secretary of State Brad Raffensperger to “find” him enough votes to overtake Biden. According to the Post, Trump told the investigator — who at the time was heading a probe of alleged ballot fraud in Cobb County — to “find the fraud” and that he would be a “national hero” if they did.

None of the president and his allies’ allegations of voter fraud in Georgia or anywhere else in the country have been substantiated, but that didn’t stop Trump and others from repeatedly promoting the conspiracy theories. That campaign to overturn the election culminated in Trump holding a rally on the National Mall on Wednesday in which he incited a violent subsequent attack by his supporters on the Capitol, where a joint session of Congress was meeting to ratify Biden’s victory.

The Post has not named the Georgia official out of concern that he could be targeted with threats by allies and supporters of the president. Raffensperger, who alluded to the earlier call in an interview this week, told the Post on Friday that “he was not familiar with the specifics of what the president said in the conversation with his chief investigator, but said it was inappropriate for Trump to have tried to intervene in the case,” commenting, “That was an ongoing investigation. I don’t believe that an elected official should be involved in that process.”

Unlike Trump’s January 2 call to Raffensperger and other Georgia officials, the December 23 call was not recorded. As of Saturday, the president is known to have made at least three calls to pressure Georgia officials in the aftermath of his loss to Biden in the state, including one to Georgia governor Brian Kemp on December 5. And the president had tried to make more calls, having reportedly attempted to get Raffensperger on the phone 18 times before finally succeeding on January 2. Trump has repeatedly launched personal attacks on Kemp and Raffensperger over their failure to help him reverse his defeat and has vowed to run them out office.

Trump’s attempts to pressure Georgia election officials may put the president in legal jeopardy, and he may have committed obstruction by calling the investigator — but as the Post explains, proving Trump broke the law would likely be difficult:

Trump’s earlier call to the chief investigator could also carry serious criminal implications, according to several former prosecutors, who said that the president may have violated laws against bribery or interfering with an ongoing probe.

“Oh my God, of course that’s obstruction — any way you cut it,” said Nick Akerman, a former federal prosecutor in New York and a onetime member of the Watergate prosecution team, responding to a description of Trump’s conversation with the investigator. Akerman said he would be “shocked” if Trump didn’t commit a crime of obstruction under the Georgia statutes. He said the fact that the president took the time to identify the investigator, obtain a phone number, and then call “shows that he’s trying to influence the outcome of what’s going on” …

Robert James, a former prosecutor in DeKalb County, Ga., said that proving obstruction would hinge on what Trump said and the tone he used, as well as whether the president’s intentions were clear.

Daily news about the politics, business, and technology shaping our world.