US economy sheds jobs for first time since April 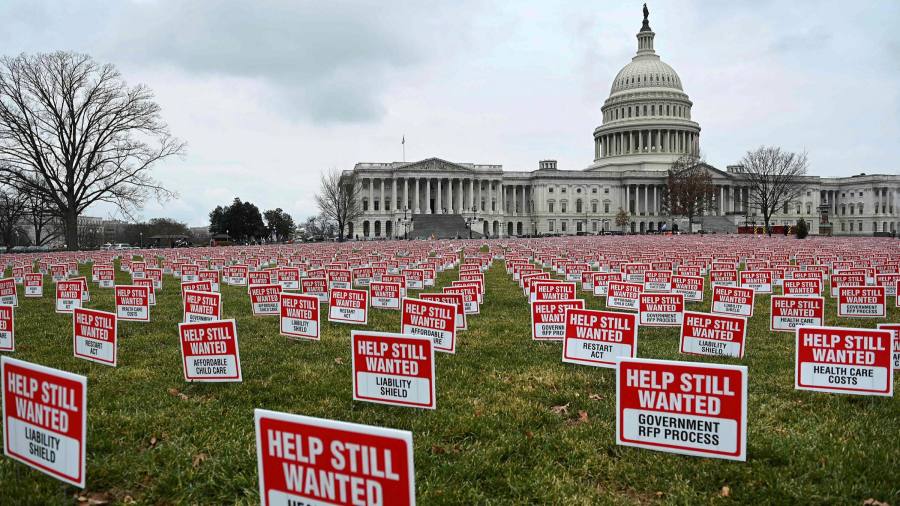 The US economy shed 140,000 jobs in December, leaving the unemployment rate at a stubbornly high 6.7 per cent and exacerbating fears that the new coronavirus surge is stalling Americaâ€™s recovery.

It is the first monthly loss of jobs in the US since the early stage of the pandemic in April.

According to the Bureau of Labor Statistics, leisure and hospitality shed 498,000 jobs, making it one of the hardest-hit sectors by far. Government lost 45,000 jobs while education and healthcare services lost 31,000 jobs. However, retailing, manufacturing and construction kept adding new positions.

The data was released by the BLS at the end of a tumultuous week in Washington, with President Donald Trumpâ€™s supporters storming the US Capitol in a dramatic siege that threatened Americaâ€™s political stability.

The latest surge in coronavirus cases has led to new restrictions in several cities and states with fatalities at a record high. But the US jobs market is expected to receive some relief after Congress agreed a $900bn stimulus package that could help protect the recovery in the first quarter.

The prospect of Democratic party control of the US Senate after it captured two pivotal seats in the upper chamber of Congress has sharply increased the odds of additional stimulus on top of that.

US government bond prices slid following the release, extending a multi-dayÂ sell-off that kicked off in earnest after the latest election results. The yield on benchmark 10-year Treasuries climbed 0.01 percentage points to 1.09, its highest level in nearly 10 months. Yields rise as prices fall.

Despite the disappointing figures, the S&P 500 rose 0.4 per cent at the start of trading. The blue-chip stock index has seen three straight days of gains, as investors looked past the political turmoil in Washington and instead focused on the additional fiscal stimulus likely to come following Democratic president-elect Joe Biden’s inauguration later this month.

James Knightley, chief international economist at ING, warned thatÂ the severity of the economic downturn was likely to weigh on the pace and vigour of theÂ recovery.Â

â€œThis weakens the foundation for that recovery,â€ he said. â€œWith fewer businesses in operation and fewer people in work, you start from a much weaker base.â€

Mr Knightley added that he anticipated many more months of negative headlines for the jobs market, with containment measures implemented by policymakers unlikelyÂ to be eased anytime soon given the alarming rise in Covid-19 cases. That may mean that the enormousÂ optimism about the economicÂ rebound currently priced into markets may be misguided, he cautioned.Â

â€œI’m nervous that the market is getting a littleÂ carried away,â€ Mr Knightley said.Â

The Federal Reserve last month said it would keep interest rates close to zero until inflation was on track to exceed 2 per cent and the economy hit full employment. It also intended to keep buying debt on a large scale until there was â€œsubstantial further progressâ€ in the recovery.

But it held off on taking any action to provide more monetary support for the economy, looking past the winter slump in the recovery towards a better outlook later in the year after Covid-19 vaccinations are more widespread.

Some Fed officials even began discussing the possibility of an earlier-than-expected tapering of the rate of asset purchases based on a more rapid economic improvement, but the worsening labour market performance may diminish momentum for that.

Economists noted that there were encouraging elements within the otherwise disappointing jobs report. Payroll employment for the months of November and October was revised upwards, and many of the job losses were concentrated in leisure and hospitality, and to a lesser extent the public sector, indicating that the labour market recovery proceeded in the rest of the economy.

â€œLooking ahead, continued restrictions on dining could see payrolls fall further in January but, with the high-frequency indicators suggesting that the rest of the economy is still holding up and additional fiscal stimulus starting to feed through, we expect first-quarter GDP growth to be positive,â€ Michael Pearce, senior US economist at Capital Economics, wrote in a note.