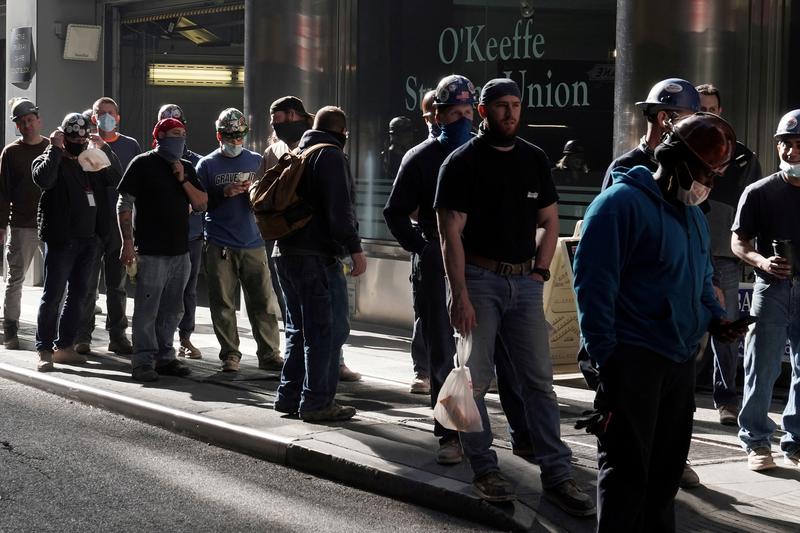 WASHINGTON (Reuters) – The U.S. economy shed jobs for the first time in eight months in December as the country buckled under an onslaught of COVID-19 infections, suggesting a significant loss of momentum that could temporarily disrupt the recovery from the pandemic.

The plunge in nonfarm payrolls reported by the Labor Department on Friday was concentrated in the coronavirus-sensitive leisure and hospitality sector, which lost nearly half a million jobs. But with other industries including retail, manufacturing and construction performing better, the economy is unlikely to tip back into recession.

Nearly $900 billion in additional pandemic relief approved by the government in late December will probably provide a backstop. More fiscal stimulus is expected now that Democrats have gained control of the U.S. Congress, boosting the prospects for President-elect Joe Biden’s legislative agenda. There is also optimism the rollout of coronavirus vaccines will be better coordinated under the incoming Biden administration.

Congress on Thursday formally certified Biden’s victory in the Nov. 3 election, hours after hundreds of President Donald Trump’s supporters stormed the U.S. Capitol. The employment report is one of the final scorecards delivered during the Trump presidency and stands as a reminder of the tumultuous economic crisis that marked his last months in office.

“This is a pause in the recovery, not a full-on stall,” said Chris Low, chief economist at FHN Financial in New York.

Payrolls decreased by 140,000 jobs last month, the first decline since April, after increasing by 336,000 in November. The economy has recovered 12.4 million of the 22.2 million jobs lost during the pandemic. Economists polled by Reuters had forecast 71,000 jobs would be added in December.

COVID-19 cases in the United States have jumped to more than 21 million, with the death toll exceeding 365,000, according to a Reuters analysis. The economy ended 2020 with 9.4 million fewer jobs.

The leisure and hospitality sector lost 498,000 jobs last month, with employment at bars and restaurants tumbling 372,000, accounting for three quarters of the drop. Restaurants and bars in many states, including New York and California, were shut during the holidays to slow the spread of the virus.

Excluding the leisure and hospitality sector, payrolls rose at roughly the same pace as in November.

There were also decreases in private education jobs as many universities and colleges closed after the Thanksgiving holiday. Government employment declined for a fourth straight month, with losses spread across federal state and local governments.

But retail employment rose by 121,000 jobs. Factories hired 38,000 workers and construction payrolls increased by 51,000 jobs. There were also gains in employment in professional and business services, transportation and warehousing, health care and wholesale trade industries.

Weak payrolls joined soft consumer confidence and spending in underscoring the brutal impact of the coronavirus on the economy, which sank into recession in February. The data increases the likelihood of another rescue package by March. Introducing his nominees to head the Labor and Commerce Departments, Biden said on Friday that “help is on the way.”

Stocks on Wall Street rose, with the Nasdaq and S&P 500 hitting record highs. The dollar gained versus a basket of currencies. U.S. Treasury prices were mostly trading lower, with the yield curve steepening.

With the virus hollowing out lower-wage industries, average hourly earnings surged 0.8% after gaining 0.3% in November. The average workweek dipped to 34.7 hours from 34.8.

Though the unemployment rate was unchanged at 6.7% in December, that was because of people misclassifying themselves as being “employed but absent from work.” Without this misclassification, the jobless rate would have been about 7.3%.

Despite last month’s job losses, the labor market is steadily improving. A broader measure of unemployment, which includes people who want to work but have given up searching and those working part-time because they cannot find full-time employment, fell to 11.7% from 12.0% in November.

The number of people who have permanently lost their jobs declined by 348,000 to 3.370 million. That was the biggest drop since December 2010. Still, it will probably take years for the scars from the pandemic to heal. Nearly 4 million Americans have been unemployed for more than six weeks, accounting for 37.1% of the jobless in December.

The labor force participation rate, or the proportion of working-age Americans who have a job or are looking for one, remains at a depressed 61.5%. The employment-to-population ratio, seen as a measure of an economy’s ability to create jobs, held at a low 57.4%.

Economists are optimistic employment will rebound in the months ahead and accelerate through 2021 amid expectations for increased inoculations and additional fiscal stimulus, including more infrastructure spending under the Biden administration.

“Savings are burning a hole in many people’s pockets after having to avoid travel, in-person dining and entertainment for nearly a year,” said Sarah House, a senior economist at Wells Fargo Securities in Charlotte, North Carolina. “Hiring could ramp up quickly once COVID cases are more under control.”

Many economists have upgraded their 2021 growth estimates following the recent relief package and the shift of power in Washington to the Democrats.