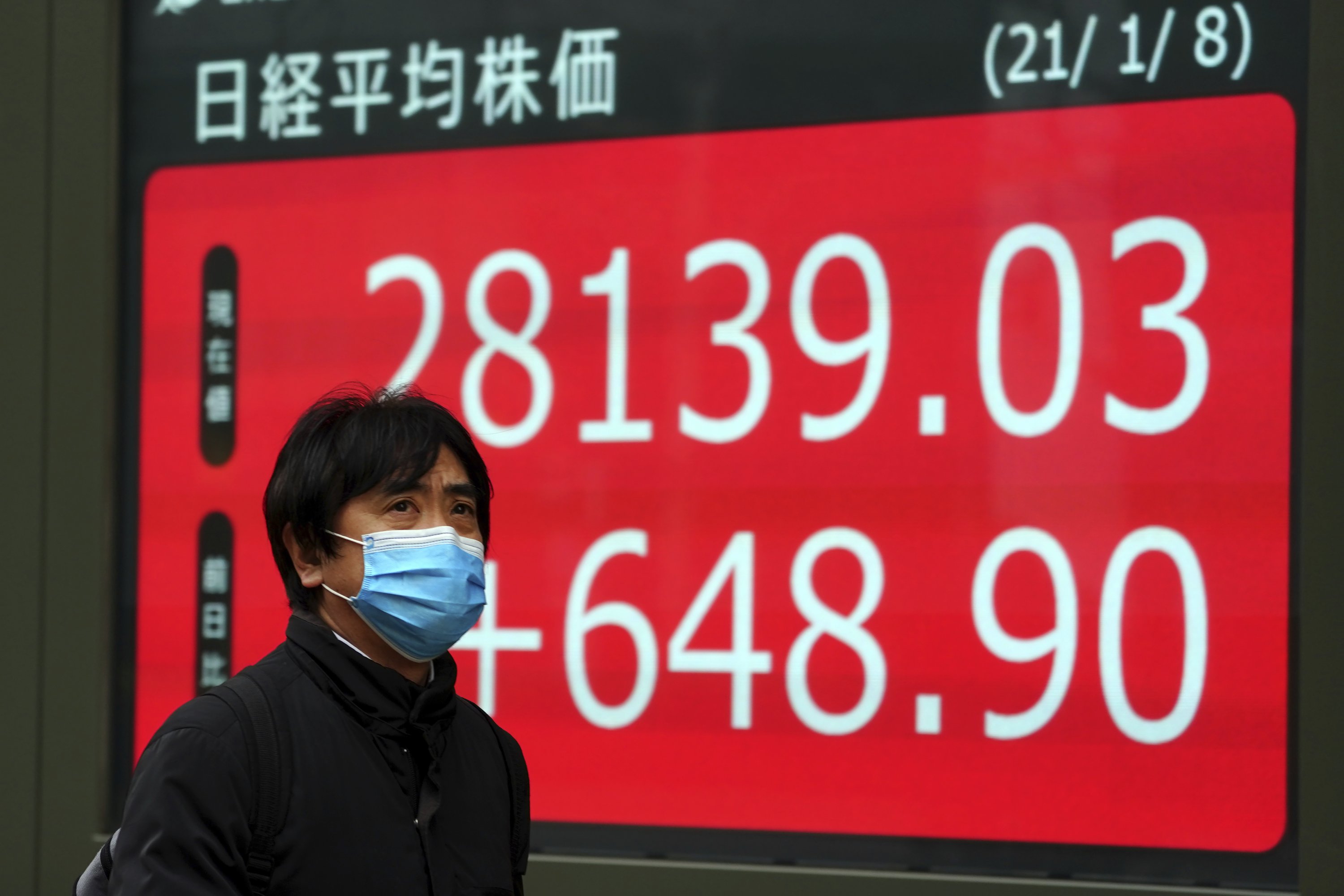 NEW YORK (AP) â€” U.S. stocks are ticking higher on Friday, despite a sober reminder of how many jobs the pandemic is destroying, as Wall Street keeps focusing more on the economyâ€™s potentially brighter future than its current pain.

The S&P 500 was 0.3% higher in early trading after President Donald Trump acknowledged for the first time on camera that heâ€™ll be leaving the White House later this month. After Democrats take control of the presidency, Senate and House, investors are anticipating Washington will try to deliver even more stimulus for the struggling economy. Thatâ€™s layering on top of expectations already built up for the economy to get healthier as coronavirus vaccines roll out in 2021.

The Dow Jones Industrial Average was swinging between gains and losses and was up 7 points, or less than 0.1%, at 31,048, as of 9:48 a.m. Eastern time, and the Nasdaq composite was 0.6% higher. All the major indexes are adding to record highs set a day before and are on .

A much weaker-than-expected report on the jobs market underscored the stakes for the economy, and analysts said it adds more pressure on Congress to act. Employers cut 140,000 more jobs last month than they added as the worsening pandemic led more businesses to shut down, the Labor Department said.

It was the first month of job losses for the economy since April, and it was much a worse reading than the modest growth that economists were expecting to see. The accelerating pandemic around the world is adding more pressure to economies that are already struggling.

Treasury yields zigzagged following the release of the jobs report, but they remain on an upward trend. Expectations for increased borrowing by the U.S. government, more stimulus for the economy and the possibility of higher inflation have carried the yield on the 10-year Treasury to 1.09%. Thatâ€™s up from 1.05% late Thursday and 0.90% early this week.

Smaller stocks tend to rise and fall more than their bigger rivals with expectations for the economyâ€™s strength. And many investors are expecting Washington to soon try to send bigger cash payments to most Americans, spend more on infrastructure and provide other support for the struggling economy.

The expectations began building shortly after Novemberâ€™s elections, and they accelerated this week after Democrats won two Georgia runoff elections for the Senate. They will give Democrats a majority in the Senate, with Vice President-elect Kamala Harris providing a tie-breaking vote amid a 50-50 split with Republicans. Democrats already controlled the House, and Democrat Joe Biden is set to take the presidential oath of office on Jan. 20.

Another encouraging thing for many investors is that Democrats will have only a thin majority in the Senate. In the optimistic case for Wall Street, that could give them enough clout to push through more stimulus for the economy but not enough to raise tax rates sharply and toughen up regulations so much that they bring down profits sharply for companies.

Optimism emanating from Washington has helped to lift markets around the world.

In Asian stock markets, Japanâ€™s Nikkei 225 rose 2.4%, its highest finish in more than 30 years. Thatâ€™s even though Japan announced a state of emergency for Tokyo and nearby areas, asking people to stay home and refrain from going out at night to dine and drink.

China says it will sanction U.S. officials for 'nasty' behavior on Taiwan

China says it will sanction U.S. officials for 'nasty' behavior on Taiwan