Rapid7 (NASDAQ:RPD) had its price objective increased by analysts at Morgan Stanley from $71.00 to $86.00 in a report released on Friday, The Fly reports. The brokerage currently has an â€œequal weightâ€ rating on the technology companyâ€™s stock. Morgan Stanleyâ€™s price target would indicate a potential upside of 0.23% from the companyâ€™s previous close.

Rapid7 (NASDAQ:RPD) last released its quarterly earnings data on Wednesday, November 4th. The technology company reported ($0.34) earnings per share for the quarter, missing the consensus estimate of ($0.04) by ($0.30). The business had revenue of $105.10 million for the quarter, compared to analyst estimates of $101.87 million. Rapid7 had a negative return on equity of 60.46% and a negative net margin of 19.87%. Rapid7â€™s revenue was up 26.3% compared to the same quarter last year. During the same quarter last year, the company earned $0.01 EPS. As a group, research analysts forecast that Rapid7 will post -1.33 EPS for the current year. 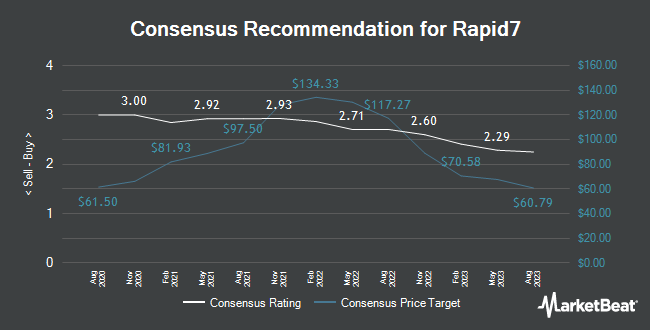 Receive News & Ratings for Rapid7 Daily – Enter your email address below to receive a concise daily summary of the latest news and analysts’ ratings for Rapid7 and related companies with MarketBeat.com’s FREE daily email newsletter.

Nasdaq vs Nasdaq 100: what’s the difference and should I invest?

Nasdaq vs Nasdaq 100: what’s the difference and should I invest?