Zscaler (NASDAQ:ZS) had its price target hoisted by analysts at Piper Sandler from $160.00 to $190.00 in a report released on Tuesday, The Fly reports. The brokerage currently has a â€œneutralâ€ rating on the stock. Piper Sandlerâ€™s price target points to a potential upside of 3.03% from the companyâ€™s previous close.

Zscaler (NASDAQ:ZS) last issued its earnings results on Tuesday, December 1st. The company reported $0.14 earnings per share (EPS) for the quarter, topping analystsâ€™ consensus estimates of $0.06 by $0.08. Zscaler had a negative return on equity of 24.33% and a negative net margin of 26.69%. The business had revenue of $142.60 million during the quarter, compared to analystsâ€™ expectations of $132.29 million. During the same quarter in the prior year, the firm earned $0.03 EPS. The businessâ€™s revenue for the quarter was up 52.4% compared to the same quarter last year. As a group, equities research analysts anticipate that Zscaler will post -1.56 earnings per share for the current fiscal year. 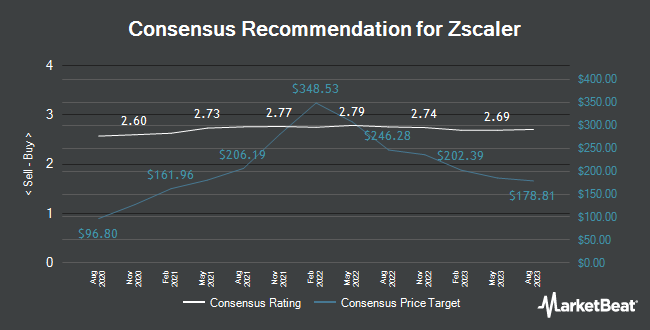 Receive News & Ratings for Zscaler Daily – Enter your email address below to receive a concise daily summary of the latest news and analysts’ ratings for Zscaler and related companies with MarketBeat.com’s FREE daily email newsletter.

Sales of US Constitution topped 1 million during Trump years