Analysts expect that Discovery, Inc. (NASDAQ:DISCA) will announce $2.81 billion in sales for the current fiscal quarter, according to Zacks. Three analysts have provided estimates for Discoveryâ€™s earnings, with estimates ranging from $2.79 billion to $2.83 billion. Discovery posted sales of $2.87 billion during the same quarter last year, which would indicate a negative year-over-year growth rate of 2.1%. The business is scheduled to issue its next quarterly earnings results on Thursday, February 25th.

According to Zacks, analysts expect that Discovery will report full year sales of $10.61 billion for the current fiscal year, with estimates ranging from $10.57 billion to $10.64 billion. For the next financial year, analysts forecast that the company will post sales of $11.68 billion, with estimates ranging from $11.31 billion to $12.00 billion. Zacks Investment Researchâ€™s sales averages are a mean average based on a survey of research analysts that cover Discovery.

Discovery (NASDAQ:DISCA) last announced its quarterly earnings data on Thursday, November 5th. The company reported $0.81 EPS for the quarter, topping the Zacksâ€™ consensus estimate of $0.68 by $0.13. The business had revenue of $2.56 billion during the quarter, compared to the consensus estimate of $2.50 billion. Discovery had a return on equity of 20.76% and a net margin of 13.36%. The businessâ€™s revenue for the quarter was down 4.4% on a year-over-year basis. During the same period in the previous year, the company posted $0.87 earnings per share.

Read More: How does equity income fit into an investing strategy? 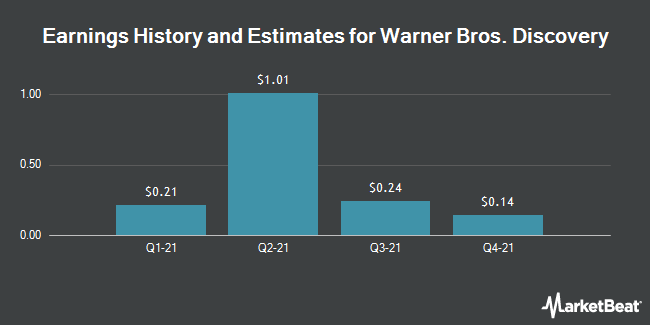