Investing in startups – Where to start?

In recent years, in the heat of the development of new technologies, small companies have emerged in the business ecosystem that start with very little capital and employees that, in a short time, become the object of desire of large multinationals and important investors for their exorbitant success. Weâ€™re talking about startups. In this guide to investing in startups, Iâ€™m going to talk about how to invest in startups, how to do it before and after they become successful companies and the factors to consider when entering this sector. 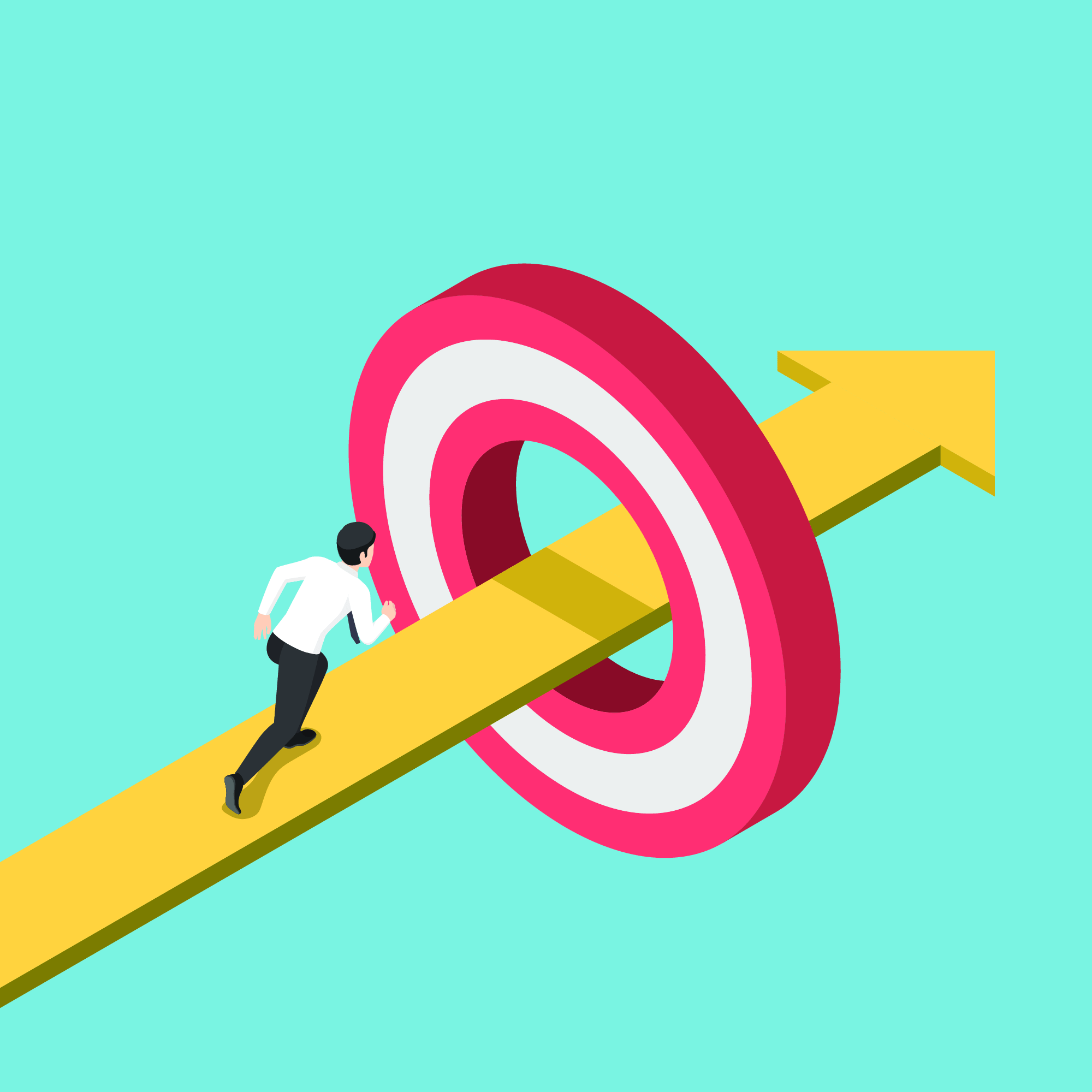 Investing in startups – What are startups?

We can define a startup as a newly created company that has a high probability of success. Its main characteristic is its exponential growth in a short time, with a low start-up budget and making use of new information and communication technologies.

Unlike small and medium-sized companies, which often start their activity after a significant outlay of money and after having to overcome various bureaucratic procedures, startups go to market on the fly in search of financing to cover the development of their activities. To do this, they resort to digital and online environments, without the need for physical space.

Let’s get started with this guide to investing in startups.

âž½ Based on innovation. Startups are closely linked to new technologies not only in the development of their business but also in access to finance.

âž½ Main objective – Grow quickly with low starting capital. This is its main characteristic – spending little but obtaining great benefits, so the margin is very wide.

âž½ External financing – Business Angels or angel investors. This is a person or entity that helps financially and sometimes with the companyâ€™s work with the hope that in the future it will bring them benefits. This is similar to traditional patronage.

âž½ In some countries, they have tax advantages and public subsidies.

Instead of going to your favourite search engine and typing in ‘investing in startups Reddit’, for example, I’ll give you an overview of how to get started.

Have you ever thought of investing in a startup brewery? What about investing in digital startups? The options around the world now are endless, as reflected in the following image: 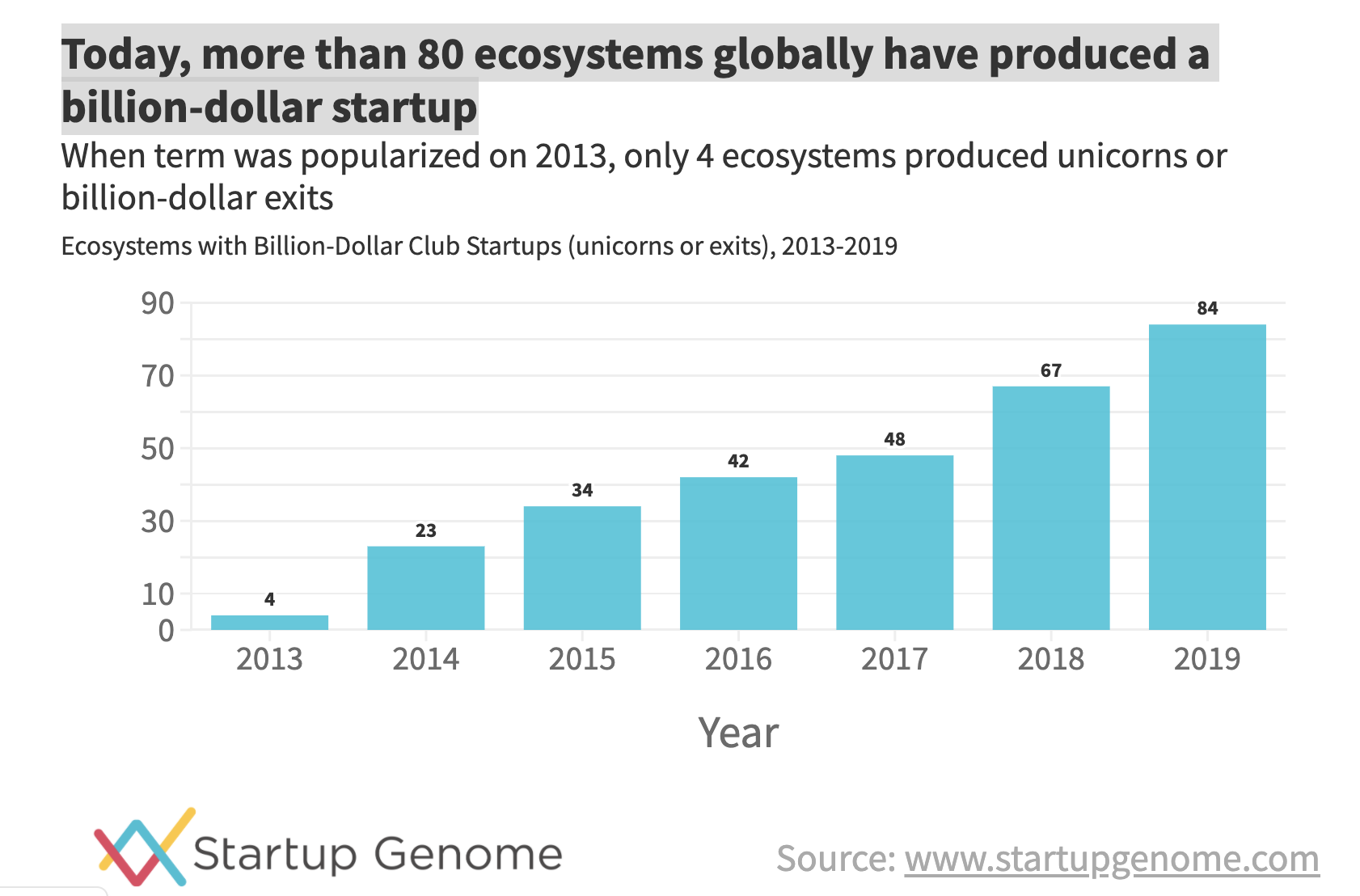 Source: Startup Genome. Image that reflects how the number of ecosystems that have generated billion-dollar startups has multiplied. Image captured on December 20, 2020.

As we see in the image, in 2013 only four startup ecosystems produced so-called ‘unicorns’. In the Startup Genome report you can check the current ranking of these ecosystems, with Silicon Valley at the top, as expected. However, the Asia-Pacific region has been gaining strength in recent years and already accounts for 30% of the global ecosystem. 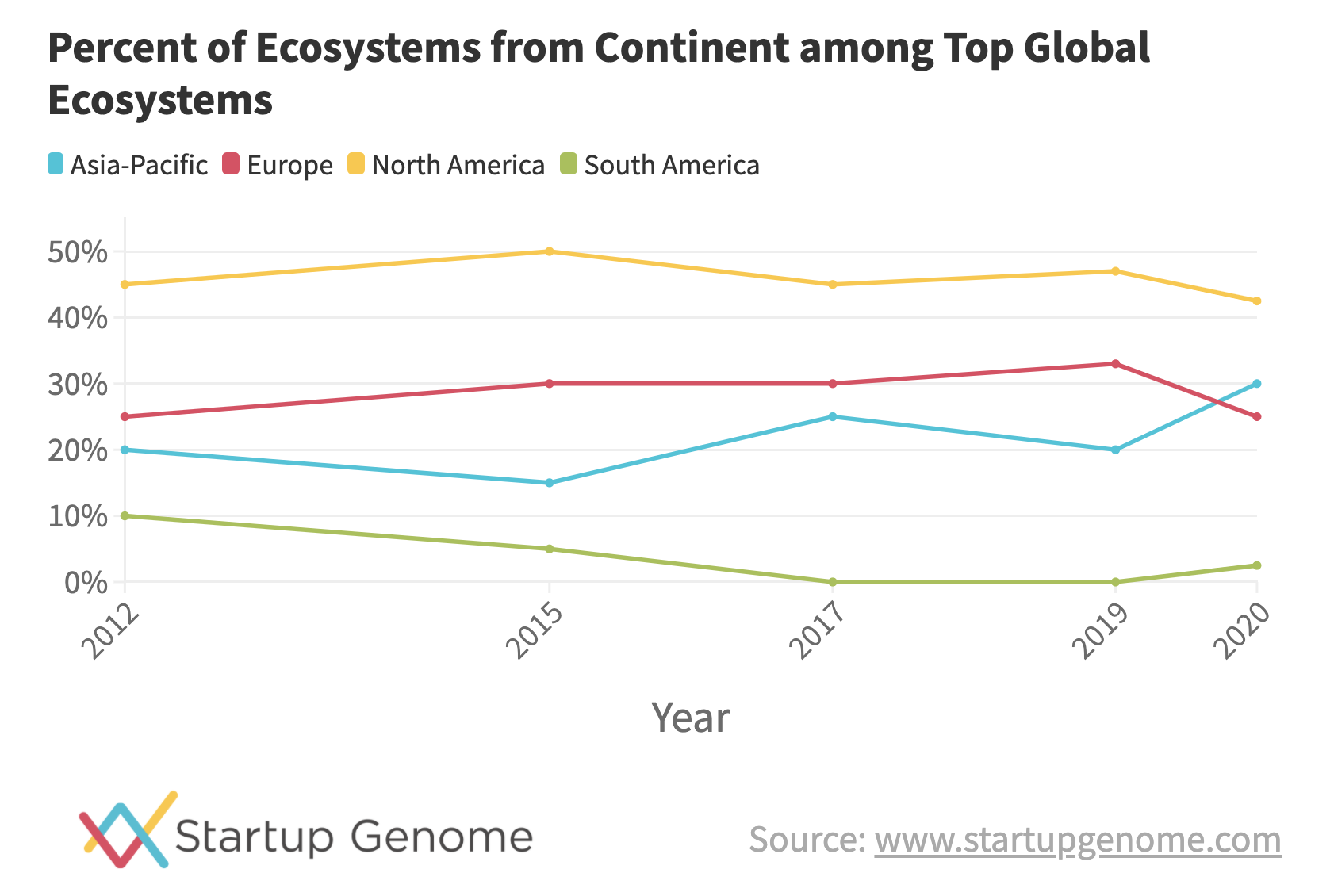 The report analyzes the impact of the coronavirus crisis on startups and, of course, the most affected are those that are dedicated to the tourism sector and the fashion and beauty sectors. In the case of the coronavirus pandemic, it doesn’t matter as much whether you are interested in investing in Nashville startups or investing in startups in the UK, for example. Global factors sometimes affect a broad range of business sectors all around the world.

Here are the three primary ways:

Thereâ€™s a fourth option to invest in startup companies on a later stage: once they have gone public. How? You can buy shares directly or through Contracts for Difference (CFDs). In both cases, we can benefit from dividend payments, if the company pays them. Although, itâ€™s not the usual case.

âž¤ If you want to start practicing investment strategies with startups that have recently debuted on the stock market, such as Zoom, you can open a free Admiral Markets demo account by clicking on the following banner:

So, this is all good, but maybe you’re looking for some more inspiration as you learn how to make money investing in startups. Perhaps from people with experience:

Athletes who have invested in startups

As it is with all investors, there are some celebrities investing in startups who’ve and seen both successes and failures. Not all athlete-backed startups take off off. A high profile example is the Curt Schilling-backed 38 Studios startup. On the other hand, Shaq’s investment in Google during its early stages proves that investing early can be profitable.

Let’s take a look at 10 athletes investing in startups:

David Beckham: This global icon caught attention when he decided to invest in a little-known streaming app based in Britain, MyEye. This company aims to some day compete with Periscope, and with this legend’s endorsement, the company received global recognition.

Carmelo Anthony: His bravery extends beyond the basketball court. The prolific forward for the Knicks created the seed fund, M7 Tech Partners. Today, it is involved with several companies, including Lyft, SeatGeek, DraftKings, and many others.

LeBron James: James has a history of several investments in companies that weren’t startups, (such as being a part owner of the Liverpool Football Club under the Fenway Sports Group). This basketball star invested early in Beats Headphones. Later on, when Dr. Dre sold his booming business for $3 billion to Apple, reports claim that James profited $30 million.

Stephen Curry: This basketball MVP, who seems to be performing at a level above most other players in the NBA, has opted out of investing in California-based companies and instead invested in a company based in Boston. Curry pickedÂ CoachUpÂ not as much for a staggering profit as much as he simply believes in their service (as he has personal success with private coaching).

Magic Johnson: A former NBA player, Johnson is considered one of the greatest NBA players ever history. Throughout his investment career, his investment company ‘Magic Johnson Enterprises’ hasÂ invested in several successful businesses including Sodexo, T.G.I. Friday’s, Burger King locations, the Los Angeles Lakers and many others.

Shaquille Oâ€™Neal: Shaq’s reputation as an investor immediately gained credibility after the skyrocketing success of Google, in which he owned a pre-IPO stake in. Beyond Google, he also is involved with several startups.Â

You now know about several famous people who have had success investing in startups, but now it’s time we look at the other side – the startups, themselves.

There are many startup success stories, but if I had to choose some examples, Airbnb or Uber would have to be included. Although, we can also talk about investing in tech startups, in giants like Facebook or even Apple, which started in a garage.

Let’s take a closer look at the case of Airbnb.

The Airbnb story begins in 2007 in a San Francisco apartment. Startup founders Brian Chesky and Joe Gebbia didn’t have enough money to pay the rent after the landlord raised it. So, they decided to buy three inflatable beds and rented them, including breakfast, to those attending a convention held in the city.

To turn this idea into business, they hired their friend Nathan Blecharczyk, and together they officially founded the hosting company in November 2008. A few months later, their ‘business angel’, programmer Paul Graham, and the definitive name, Airbnb, arrived.

By 2011, it was already present in almost 90 countries. Itâ€™s currently available in more than 81,000 cities and 191 countries around the world. Its founders are among the richest in the world, according to Forbes.

On December 10, it debuted on the Nasdaq at $68 per share and in its first crossing it reached $146. You can now invest in Airbnb with Admiral Markets UK Ltd via an Invest.MT5 account. Click the banner below to get started:

Uber, like Airbnb, emerged in response to a need from its founders. In this case Garret Camp realized the huge cost that he was forced to take on when he had to hire a private driver to make various outlays. It was then, in 2009, that Camp, together with Travis Kalanick, founded Ubercab. It was about being able to hire a vehicle to make specific trips with a single click.

In 2011, the word â€˜cabâ€™ disappeared from the name and its blazing success began. That same year, it began its international expansion thanks to the arrival of new financing from large investors, such as Jeff Bezos, the founder of Amazon.

Problems arrived in 2017, with several complaints in some countries of unfair competition with taxi drivers. At that time, Kalanick left the company management amid pressure due to several scandals. But, without a doubt, the coronavirus crisis is whatâ€™s making the most impact on this startup due to the adoption of mobility restrictions to slow the spread of infections.

However, it hasnâ€™t done badly on the stock market. The company debuted on the New York Stock Exchange in May 2019 at $45 per share. In early December 2020, it reached highs at $56. We can see its evolution in the following graph: 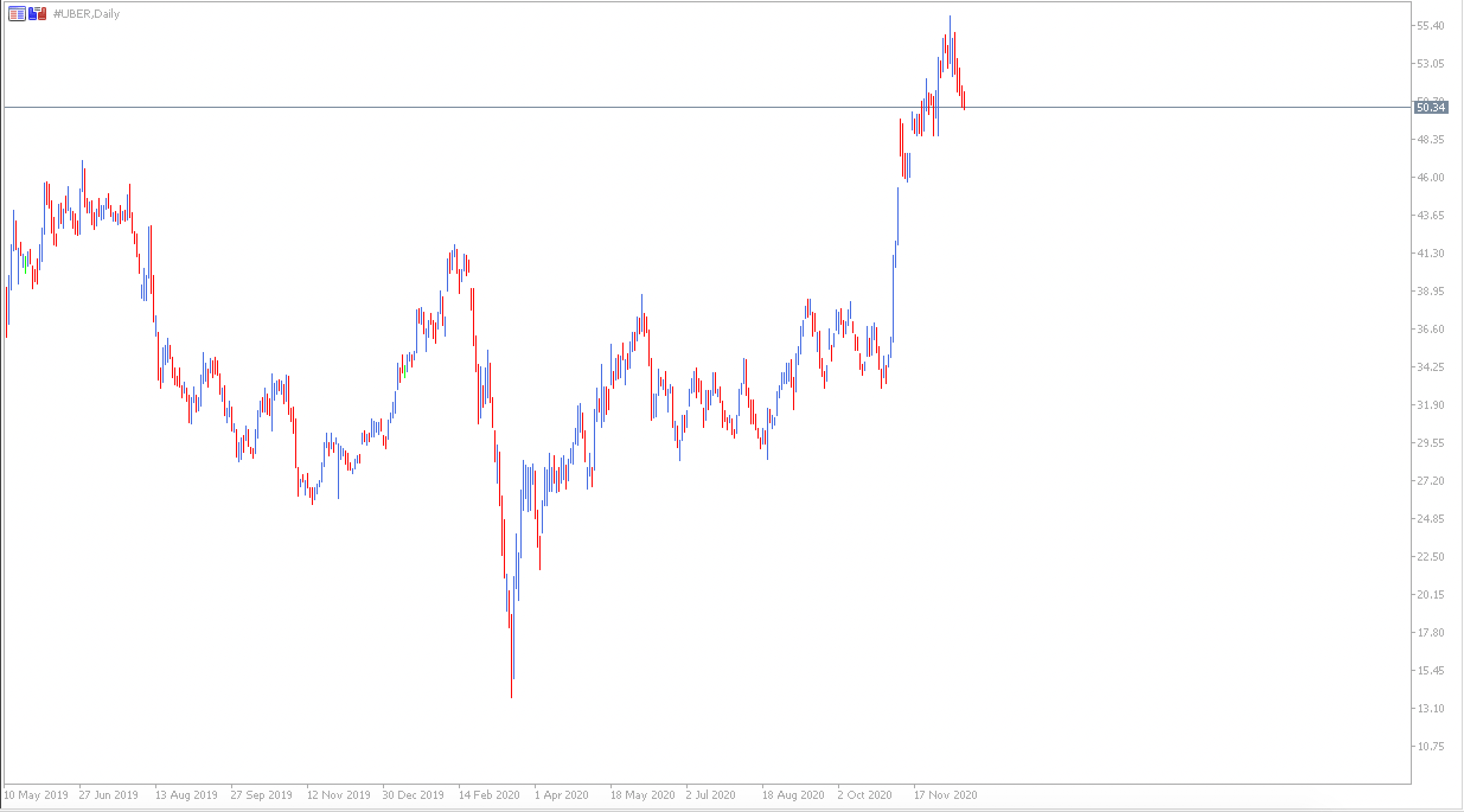 With Admiral Markets you can invest in Uber in two ways: directly, as in the case of Airbnb, or indirectly, through Contracts for Difference (CFDs). If you want to start operating with Uber shares now, just click on the following banner:

Other articles that may interest you:

We are a broker with a global presence and regulated by the highest financial authorities. We provide access to trading platforms. Admiral Markets offers trading of Contracts for Difference (CFDs) with stocks, Forex, indices, commodities, as well as Exchange-traded funds (ETFs) and stocks.

This material does not contain and should not be construed as containing investment advice, investment recommendations, an offer or solicitation for any transaction in financial instruments. Please note that such business analysis is not a reliable indicator for any current or future performance as circumstances may change over time. Before making any investment decision, you should seek the advice of independent financial advisers to ensure that you understand the risks.