'It would damage our republic forever': McConnell rebukes attempt to overturn election

Speaking from the Senate floor, the Kentucky Republican said he has served in the Senate for 36 years and said “this will be the most important vote I’ve ever cast.”

“Nothing before us proves illegality near the massive scale that would have tipped the entire election,” McConnell said. “The Constitution gives us here in Congress a limited role. We cannot simply declare ourselves a national board of elections on steroids.”

He continued: “The voters, the courts, the states â€” they’ve all spoken. They’ve all spoken. If we overrule them, it would damage our republic forever. This election was actually not unusually close. Just in recent history, 1976, 2000Â and 2004 were all closer.”

In perhaps his most stern warning to fellow Republicans objecting to vote counts, he said democracy risked entering a “death spiral” if the election were overturned.

â€œIf this election were overturned by mere allegations from the losing side, our democracy would enter a death spiral,” he said. â€œWeâ€™d never see the whole nation accept an election again. Every four years would bring a scramble for power at any cost.”

These remarks came after an objection was raised to the certification of Arizona’s 11 electoral votes to Biden and Vice President-elect Kamala Harris byÂ Rep. Paul Gosar, an Arizona Republican, and 60 other House colleagues. 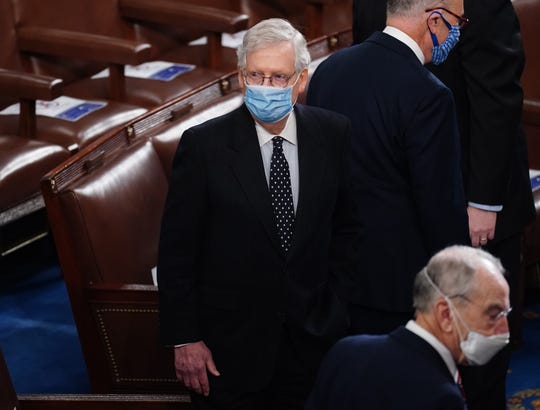 Senate Majority Leader Mitch McConnell arrives for the Electoral College vote certification for President-elect Joe Biden, during a joint session of Congress at the U.S. Capitol on Wednesday in Washington, DC.

Sen. Ted Cruz, a Texas Republican, joined the objection, which sent both houses of Congress back to their respective chambers for up to two hours of debate on the objection.

President Donald Trump and his allies have repeatedly claimed, with no evidence, that there was widespread voter fraud in the 2020 presidential election, and that the election was rigged.

Objectors include Republican senators such as Cruz and Josh Hawley of Missouri. Dozens of Republican members of the House of Representatives also objected to the certification of the results.

McConnell’s comments come as tension continues to grow between him and Trump, who has been pressuring the majority leader to overturn the results of the election. McConnell first publicly recognized Biden’s victory on Dec. 15Â â€” one day after the former vice president formally won the Electoral College.

In response, Trump wrote in a tweet directed at McConnell that it was “too soon to give up” on the election and that the “Republican Party must finally learn to fight.” The president also later claimed, without evidence, that he “saved” McConnell from losing his reelection bid to former Marine fighter pilot Amy McGrath.Â McConnell won that race by 20 percentage points.

Kentucky’s other senator, Rand Paul, said Wednesday afternoon that he would speak on the Senate floor about the objection: “America is admired around the world for our free elections. We must, we absolutely must, fix this mess and restore confidence and integrity to our elections.”Â

Paul previously had made several false claims about the election and once said during a congressional hearing in December that the election “in many ways was stolen.”