Enticing as It Is, Luminar Stock Is Still in Deep Speculation Territory

Shares of leading lidar-sensor maker Luminar Technologies (NASDAQ:LAZR) were up almost 89% in December. Â LAZR stock still has a lot of volatility in its future, though. 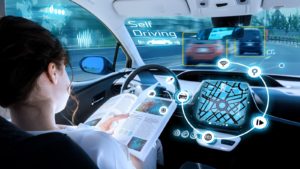 Luminar recently completed its merger with blank-check company Gores Metropoulos raising almost $600 million in proceeds. The deal will speed up the commercialization of Luminarâ€™s lidar-sensor technology for autonomous vehicles.

The market for autonomous vehicles is growing and Luminar hopes to have the first-mover advantage in its niche. However, there is little concrete evidence to solidify Luminarâ€™s lofty estimates for its future revenues.

Hence, LAZR stock remains a speculative play in the emerging autonomous vehicle industry at this stage.

Luminar develops lidar sensors for AVs, which enable them to see their surroundings. The sensors essentially emit laser pulses which then bounce off surrounding objects back into the sensor. The photons returned by the sensor are subsequently converted into pixels.

The novel technology has a few startups working on it, but Luminar stands out from the pack. It has a massive cash balance and has some high-profile agreements in its kitty. However, nothing has materialized yet, and one can only assess the company on its remarkable estimates for the future.

Lidar sensorsâ€™ role has been hotly debated in the automotive and tech world. Many consider it to be inseparable from the industryâ€™s success, providing an unmatched 3D environment mapper with impressive depth perception.

Apart from its depth perception accuracy, it is also ideal for 3D mapping, which means that the vehicles can effectively navigate with greater predictability.

Moreover, there is a lot of potential for its improvement with the development of solid-state sensors, sensor ranges, and 4-dimensional lidar. One of the key concerns about the technology was its cost. Googleâ€™s first AV prototype back in 2012, used a $70,000 lidar.

It is estimated that the autonomous vehicle industry will grow at a staggering 63.5% till 2027. Similarly, the lidar industry is also expected to grow by 28.4% in the same time frame.

In many ways, such statistics validate the seemingly incredulous estimates from Luminar and other companies in its niche.

Can Luminar Back up Its Claims?

Luminar raised quite a few eyebrows when it talked about generating $837 million in revenues in 2025, from an expected $15 million this year. In its defense, it does have several working agreements with customers that could help it achieve those numbers.

The companyâ€™s working partners include the leading driver-assistance systems provider in Mobileye. It will be using Luminarâ€™s technology in testing its fleet.

Daimler (OTCMKTS:DDAIF), commonly knowns as Mercedes Benz, has also partnered with Luminar as it forays into the sector. Moreover, Luminar will also be providing its sensors to automotive giant Volvo (OTCMKTS:VLVLY).

The company would need to scale its production as demand for its products increases. However, it appears to have a sufficient amount of organic resources to finance its projects, especially after the reverse merger.

Margins will be a key concern as we advance, which will underpin its path to profitability. Naturally, its software margins are likely to be much higher than its hardware margins.

Luminar Technologies has a solid case for a sustainable business down the line. The autonomous vehicle sector is likely to witness incredible growth fueled by investments from the tech and automotive worldâ€™s bigwigs.

Therefore, the scope of lidar sensors is immense, and Luminar is currently the technologyâ€™s go-to company. Its business model is such that it can generate high margins and avoid exorbitant capital investments.

However, itâ€™s still early days for Luminar, and the company needs to make strides in the coming months to convince investors of its worth. Therefore, LAZR stock is currently a speculative investment which is best for a short position.

On the date of publication, Muslim Farooque did not have (either directly or indirectly) any positions in the securities mentioned in this article