Ardelyx (NASDAQ:ARDX) last issued its quarterly earnings results on Tuesday, November 10th. The biopharmaceutical company reported ($0.20) earnings per share for the quarter, beating the consensus estimate of ($0.28) by $0.08. The business had revenue of $2.71 million for the quarter, compared to the consensus estimate of $1.31 million. Ardelyx had a negative net margin of 1,063.74% and a negative return on equity of 53.93%.

In related news, insider Jeffrey W. Jacobs sold 3,949 shares of the companyâ€™s stock in a transaction dated Monday, December 21st. The shares were sold at an average price of $6.88, for a total transaction of $27,169.12. Following the transaction, the insider now directly owns 92,862 shares in the company, valued at approximately $638,890.56. The sale was disclosed in a legal filing with the Securities & Exchange Commission, which is accessible through the SEC website. Also, Director David M. Mott acquired 170,000 shares of Ardelyx stock in a transaction that occurred on Thursday, December 10th. The stock was purchased at an average cost of $5.89 per share, for a total transaction of $1,001,300.00. The disclosure for this purchase can be found here. Corporate insiders own 3.96% of the companyâ€™s stock. 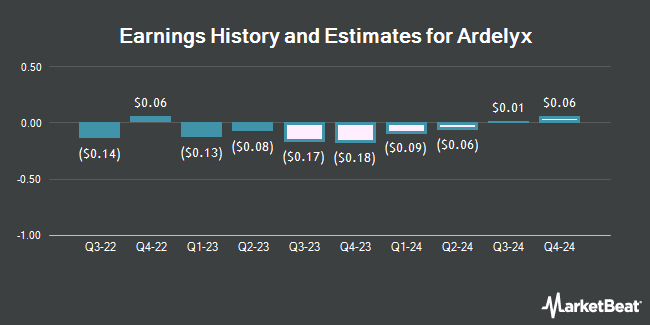 Receive News & Ratings for Ardelyx Daily – Enter your email address below to receive a concise daily summary of the latest news and analysts’ ratings for Ardelyx and related companies with MarketBeat.com’s FREE daily email newsletter.