A president, a violent assault and a blow against a lawful election

American democracy came under attack Wednesday, not the rhetorical kind that usually evaporates on the airwaves, but an actual, physical mob assault meant to derail the peaceful transfer of power.

Whether you support President Trump or not, whether you believe his election fraud claims or not, the siege at the Capitol was a sad and shameful spectacle that embarrassed us in the eyes of the world. By the time it was winding down under cover of darkness, one woman was dead, the president was tweeting about the “great patriots” who formed this mob, and his fiercest critics were talking about invoking the 25th Amendment just two weeks before his term expires.

The most extremist thugs smashed windows, pranced around the Senate floor and Nancy Pelosiâ€™s office as if they were at a drunken frat party, and paraded their sheer disrespect for the law in the name of keeping Trump in power.

And this was the day that Congress was supposed to certify Joe Biden as the president-elect. Instead, there was chaos. 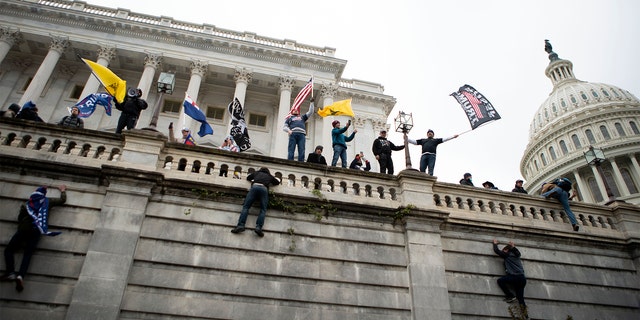 Supporters of President Donald Trump climb the west wall of the the U.S. Capitol on Jan. 6, in Washington. (AP Photo/Jose Luis Magana)

Conservative commentators, some of them on Fox, as well as certain Republicans, joined left-leaning anchors and pundits on CNN and MSNBC in accusing Trump of inciting the riot. Some of the more liberal talking heads used the violence to air their longstanding grievances against Trump, but even past defenders like Rick Santorum on CNN said it was an awful day for the president.

It was Trumpâ€™s proclamations of a stolen election, repeated at a morning rally, as he urged protesters to march to the Capitol–peacefully, he said–that fueled the heated emotions. The occasion was the doomed effort by Ted Cruz and many other Republicans to block Bidenâ€™s Electoral College wins. And itâ€™s noteworthy that Mitch McConnell warned the proceedings “could damage our republic forever.” That Vice President Pence said he didnâ€™t have the power, which Trump insisted he possessed, to reject state electors. That that George W. Bush, decrying the “sickening and heartbreaking sight,” caused by those “whose passions have been inflamed by falsehoods and false hopes.”

And that former White House press secretary Stephanie Grisham saw the need to resign as Melania Trumpâ€™s chief of staff.

And even as things spiralled out of control, the president who is quick to denounce violence by Antifa or Black Lives Matter–and justifiably so–would not criticize those who were breaking the law in his name.

After a period of silence, Trump tweeted that people should “stay peaceful” and urged support for the Capitol Police, who were badly outmanned at the domed building. A later tweet said “no violence!”

It was left to the next president to take to the airwaves. Biden said the rioting “borders on sedition” and demanded that Trump go on television and “demand an end to the siege.”

A short time later, Trump released a video–reportedly at the urging of aides–that began with “we had an election that was stolen from us” and went on to say “we have to have peace, so go home. We love you. Youâ€™re very special.”Â

A subsequent tweet about how the great patriots would never forget this day wasÂ  deleted as Twitter officials locked the presidentâ€™s account and warned it could be suspended.

Some grim scenes played out in hour after hour of live coverage. The woman who was bloodied from being shot in the chest and later died. The Capitol lockdown and lawmakers who were being given gas masks and ordered to shelter in place. A thug sitting in the Senate presiding officerâ€™s chair that had previously been occupied by Pence. Several officers were injured, and bomb squads were able to defuse pipe bombs sent to the RNC and DNC.

Adding to the sense of helplessness we all felt were the inexplicable delays as D.C. and suburban counties sent police reinforcements and the National Guard was belatedly dispatched. This was a spectacular miscalculation by the city. And yet the riot-equipped officers just stood there until finally, at dusk, they used flash bangs and tear gas to start dispersing the lawbreakers who had camped out on the Capitol steps and scaffolding above as if they owned the place.

These indelible images will always mark the tumultuous end of the Trump presidency. And while everything that happened yesterday wasnâ€™t his fault, he provided the kindling by declaring he would never concede and did little to stop the violence.Â Â

All but lost in the craziness were the network projections that Jon Ossoff had won his race in Georgia, which with Raphael Warnockâ€™s victory will give Democrats control of the Senate–a muted bulletin from the real democracy that was upended on this cold January day.Â Â

If there was a hint of redemption, it took place last night, when the House and Senate resumed the sessions that had been violently shut down, as if to say that democracy marches on, the wheels of government still turn, even after a terrible tragedy.

Sales of US Constitution topped 1 million during Trump years