WASHINGTON â€” Texas Republicans have taken center stage in President Donald Trumpâ€™s efforts to overturn the election he lost and now they plan to stand in the way of certifying the results this week, even as top members of the party acknowledge Trumpâ€™s defeat and encourage them to do the same.

U.S. Sen. Ted Cruz is leading an effort to throw out the results in the Senate, while several Texans in the House have said they wonâ€™t vote to accept the results. And Attorney General Ken Paxton is heading to D.C. for a Trump rally outside the White House on Wednesday, calling on all â€œpatriotsâ€ to join him.

Like Paxtonâ€™s failed bid last month to have the U.S. Supreme Court toss out the results from four battleground states, this weekâ€™s political acts wonâ€™t change the outcome. Trumpâ€™s lawyers have failed to prove allegations of fraud in dozens of failed lawsuits and Congress will have more than enough votes to certify the results, the final step of the election process before President-elect Joe Biden is inaugurated later this month.

POLITIFACT 2020 LIE OF THE YEAR: Downplaying, denying threat of COVID-19 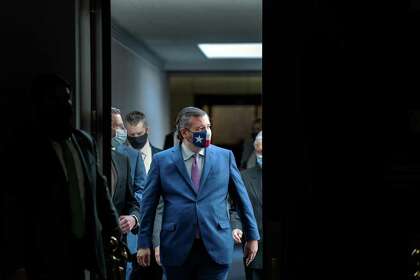 The effort is splintering the GOP â€” with even some Texas Republicans warning of the damage it may cause to the publicâ€™s faith in the process â€” and is likely to do little more than stall the proceedings.

U.S. Sen. John Cornyn had said he hoped no one would challenge the results, recently telling reporters, â€œI canâ€™t imagine it will be successful.â€

â€œThereâ€™s good constitutional and other legal grounds to say: You had your day in court, 60 different lawsuits in state courts, you had a chance to appeal those to the Supreme Court, and as I read the law, once a state certifies its electoral vote itâ€™s conclusive,â€ Cornyn told POLITICO last week.

Cruz, however, is calling for an emergency audit, saying too many voters already question the integrity of the election and pointing to polling showing as many as 39 percent of Americans believe it was â€œrigged.â€

â€œWeâ€™ve seen in the last two months unprecedented allegations of voter fraud. And thatâ€™s produced a deep, deep distrust of our democratic process across the country,â€ Cruz said in a recent interview on Fox News. â€œI think we in Congress have an obligation to do something about that.â€

But political experts say Cruz and company are likely weighing the political points theyâ€™re scoring and see little incentive to give up the fight. Cruz is using his call for an election audit to raise money, meanwhile, with Google ads for the Ted Cruz Objection Fund that read: â€œWill you help protect our Election Security by rushing an urgent donation today?â€

TEXAS TAKE: Get political headlines from across the state sent directly to your inbox

â€œPresident Trump received almost 6 million votes in Texas â€” thatâ€™s a huge electorate and these guys will be running again, in most cases in two years,â€ said RenÃ©e Cross, senior director of the University of Houstonâ€™s Hobby School of Public Affairs.

Trump remains massively popular among Republican voters, and his Texas defenders will be looking to woo them again soon enough.

Cruz is expected to make another presidential run, while Paxton, who has been indicted for securities fraud and is also under investigation by the FBI, may be preparing for potential primary challenges, experts said. Other members of Congress, including U.S. Rep. Louie Gohmert of Tyler â€” who led a failed lawsuit seeking to give Vice President Mike Pence the power to toss out the election results â€” represent heavily Republican districts and likely see themselves as doing the will of their constituents.

â€œAnything you can do to tie yourself to President Trump is only going to help you in the Republican primary,â€ said Mark P. Jones, a political scientist at Rice University. â€œPaxtonâ€™s on the defensive, worried about getting challenged. Cruz is more thinking proactively.â€

And in Texas, the â€œanti-elitist, nativist, reactionary populism,â€ that Trump espouses has been dominant among Republicans for years, said James Henson, director of the Texas Politics Project at the University of Texas at Austin. Itâ€™s the same approach that carried Cruz to his first Senate victory nearly a decade ago, even if Trump wielded it more successfully during the 2016 Republican presidential primary.

â€œThe Republican Party in Texas has been dining out on this for more than a generation and Donald Trump decided to pull his chair up and elbow Ted Cruz out of the way in 2015,â€ Henson said. â€œSetting ethical considerations aside, from a sheer realpolitik perspective, of course heâ€™s finding a lot of support among Texas Republicans.â€ 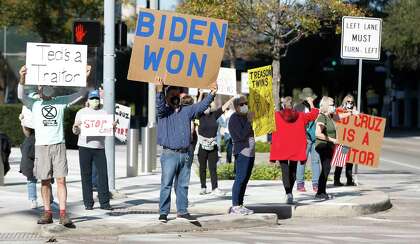 Cruz has defended his efforts as not aimed at overturning the election results, but an attempt to uphold â€œan obligation to the voters â€¦ to ensure that this election was lawful.â€ Heâ€™s repeatedly pointed to unfounded claims of voter fraud, which the presidentâ€™s attorneys failed repeatedly to prove in court.

Still, Cruz and others are wearing on some of their GOP colleagues.

â€œElected officials continuing to sow doubt amongst the public for petty political gain is playing into our enemiesâ€™ hands,â€ tweeted Will Hurd, a former CIA operative and Republican congressman from San Antonio â€” who many expect has broader political ambitions, as well. â€œFraud should be rooted out, but attempting to invalidate tens of millions of Americansâ€™ votes by a select few elected officials in Washington, D.C., is not the path forward for our party and it does nothing to unite Americans around solving the real challenges we are facing.â€

Meanwhile, on Sunday night, U.S. Rep. Chip Roy, an Austin Republican, objected to seating dozens of House members from the six states where Trump has challenged election results, a move meant to highlight GOP hypocrisy on the matter.

Roy, a former chief of staff to Cruz, offered an argument against the political path his former boss is taking.

â€œFrom a purely partisan perspective, Republican presidential candidates have won the national popular vote only once in the last 32 years. They have therefore depended on the electoral college for nearly all presidential victories in the last generation,â€ he said in a statement about the attempts to overturn the election results. â€œIf we perpetuate the notion that Congress may disregard certified electoral votes â€” based solely on its own assessment that one or more states mishandled the presidential election â€” we will be delegitimizing the very system that led Donald Trump to victory in 2016, and that could provide the only path to victory in 2024.â€

Cruz and the 11 senators backing his effort have drawn plenty of pushback from GOP colleagues in the Senate, as well.

Senate Majority Leader Mitch McConnell had urged Republicans against making such a move. U.S. Sen. Lindsey Graham, a South Carolina Republican, said Cruzâ€™s call for an audit is â€œmore of a political dodge than an effective remedy.â€ And four others â€” U.S. Sens. Mitt Romney of Utah, Susan Collins of Maine, Bill Cassidy of Louisiana and Lisa Murkowski of Alaska â€” signed a statement saying â€œfurther attempts to cast doubt on the legitimacy of the 2020 Presidential election are contrary to the clearly expressed will of the American people.â€

â€œThe 2020 election is over,â€ they said. â€œIn two weeks, we will begin working with our colleagues and the new Administration on bipartisan, common sense solutions to the enormous challenges facing our country. It is time to move forward.â€