Trumpâ€™s Solicitation of Election Fraud Is His Highest Crime 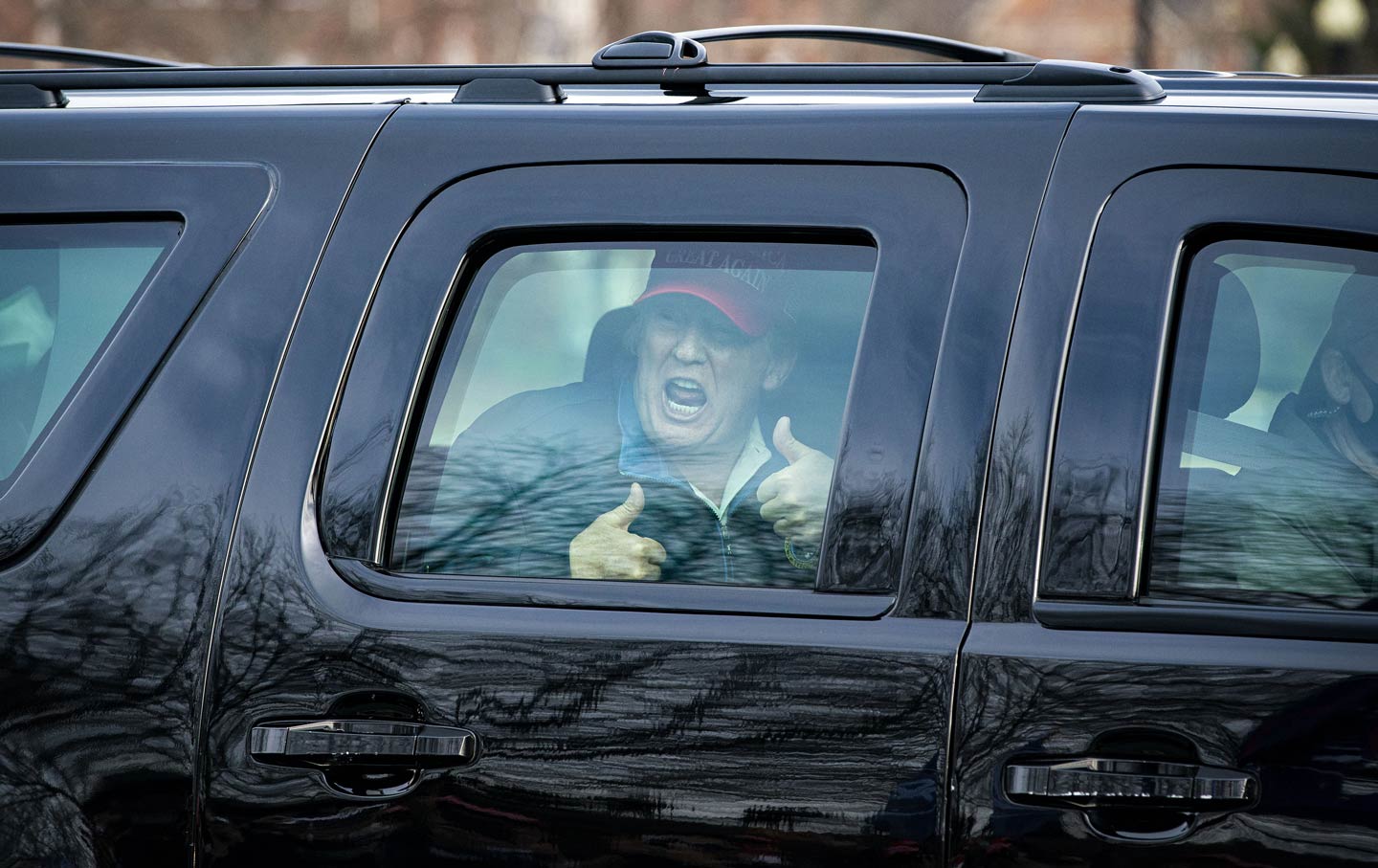 President Trump called Georgia Secretary of State Brad Raffensperger on Saturday with an explicit, and repeated, demand that the overseer of elections in a critical battleground state â€œfindâ€ a sufficient number of votes to overturn that stateâ€™s choice of President-elect Joe Biden.

This is solicitation of election fraud.

This is an abuse of office.

And, yes, this is an impeachable offense. So clearly that Free Speech for People president John Bonifaz, one of the nationâ€™s steadiest advocates for presidential accountability, says, â€œCongress should immediately vote on new articles of impeachment against this lawless president.â€

There was nothing subtle about the presidentâ€™s lawless solicitation. He was pressuring an election official to â€œfindâ€ the votes he needed to â€œwinâ€ a state that he lost by 11,779 votes after a regular count, recounts, and an audit confirmed the accuracy of the result that gave the stateâ€™s Electoral College votes to Biden.

â€œSo look,â€ the president said to Raffensperger. â€œAll I want to do is this: I just want to find 11,780 votes, which is one more than we have because we won the state.â€

Again and again during the course of the rambling hour-long callâ€”a tape of which was obtained by The Washington Postâ€”Trump returned to the demand. â€œThe people of Georgia are angry, the people in the country are angry,â€ he claimed. â€œAnd thereâ€™s nothing wrong with saying, you know, um, that youâ€™ve recalculated.â€

Raffensperger calmly explained to the president that â€œthe challenge that you have is the data you have is wrong.â€ But Trump was not backing off.

â€œSo, tell me, Brad,â€ Trump said to the secretary of state, â€œwhat are we going to do? We won the election and itâ€™s not fair to take it away from us like this. And itâ€™s going to be very costly in many ways.â€

That was an illegal appeal, so illegal that it sparked immediate speculation about the prosecution of the president. And for good reason. Noting the â€œvery costlyâ€ threat, veteran prosecutor (and lead counsel for the 2019 House Impeachment Inquiry) Daniel Goldman observed, â€œIâ€™ve charged extortion in mob cases with similar language.â€

â€œWe now have irrefutable proof of a president pressuring and threatening an official of his own party to get him to rescind a stateâ€™s lawful, certified vote count and fabricate another in its place,â€ said Bob Bauer, a senior adviser to President-elect Joe Biden.

The Georgia code says that anybody who solicits, requests or commands or otherwise attempts to encourage somebody to commit election fraud is guilty of solicitation of election fraud. â€œSoliciting or requestingâ€ is the key language. The president asked, in no uncertain terms, the secretary of state to invent votes, to create votes that were not there. Not only did he ask for that in terms of just overturning the specific margin that Joe Biden won by, but then said we needed one additional vote to secure victory in Georgia.

The blatant wrongdoing on the part of the president had everyone talking about the prospect that Trump might yet commit an additional abuse of office. â€œThe odds of Trump declaring a self pardon just went up a bunch,â€ tweeted former US Attorney for the Southern District of New York Preet Bharara.

Before we start talking about prosecutions and pardons, however, House Democrats should be talking about impeaching Donald Trump.

Yes, of course, Trump has already been impeached once during the tortured course of his single term.

Yes, of course, everyone knows Senate Republicans are disinclined to hold this president to account.

But that does not change the fact that Trump has made a case for impeachment that is too compelling to ignore. â€œThe President of the United States has been caught on tape trying to rig a presidential election. This is a low point in American history and unquestionably impeachable conduct. It is incontrovertible and devastating,â€ Citizens for Responsibility and Ethics Executive Director Noah Bookbinder said Sunday. â€œWhen the Senate acquitted President Trump for abusing his powers to try to get himself reelected, we worried that he would grow more brazen in his attempts to wrongly and illegally keep himself in power. He has.â€

â€œWhile the logistics of holding impeachment proceedings in the final two weeks of a presidency are admittedly hard to pull off, if this isnâ€™t impeachable conduct, then literally nothing is,â€ he explained. â€œCongress must act immediately.â€

The impeachment power is not time-limited.

The duty to impeach cannot be ignored simply because Mitch McConnell and his minions have no sense of dutyâ€”or shame.

Impeachment is a multifaceted tool of accountability that can be used not merely to set up a process for the Senate to remove an officialâ€”as should have happened in February when that chamber considered Trumpâ€™s high crimes and misdemeanorsâ€”but also for the House of Representatives to rebuke a wrongdoer. The chamber that Democrats control, the House, needs to address this blatant abuse of office.

A failure to hold Trump accountable for pressuring a secretary of state to â€œfindâ€ votes that would overturn a legitimate election resultâ€”and for suggesting to that secretary of state that a failure to do his illegal bidding would be â€œvery costlyâ€â€”is not just unacceptable. It is an egregious affront to constitutional governance.

Republicans like McConnell may be comfortable with that affront.

But Democrats should recognize that when impeachable offenses are committed, the impeachment power can and must be exercised.