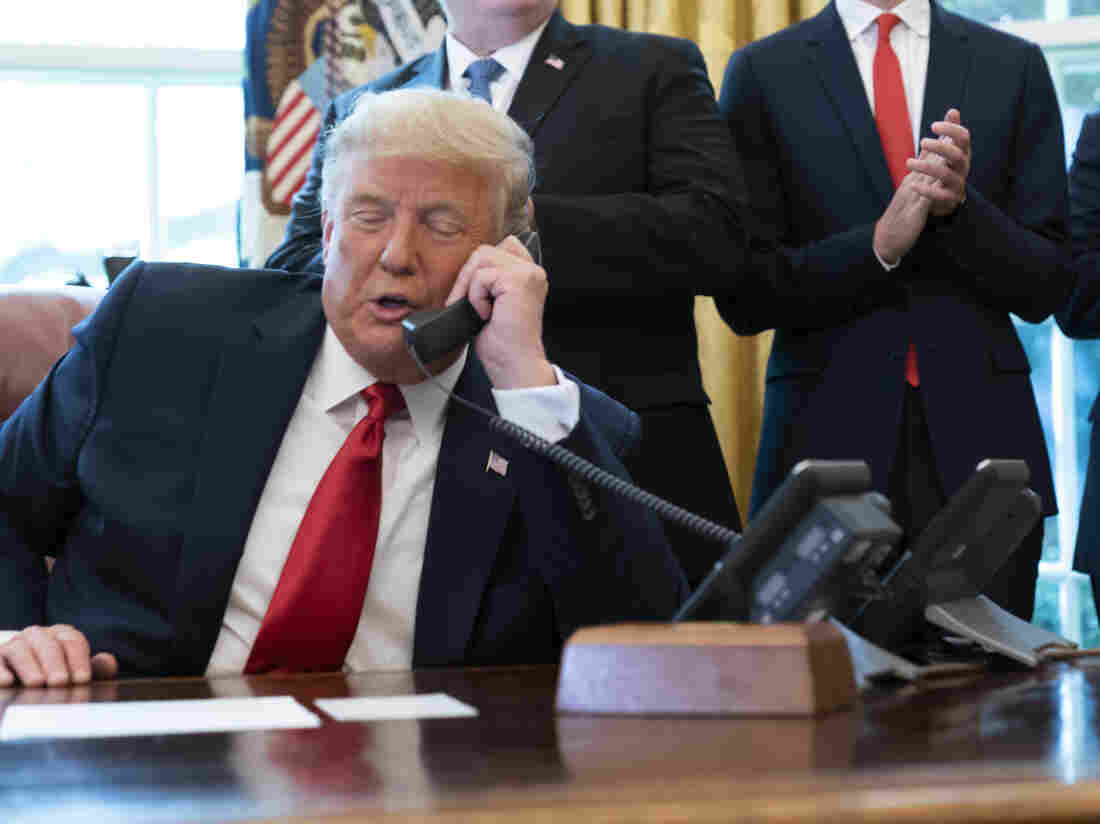 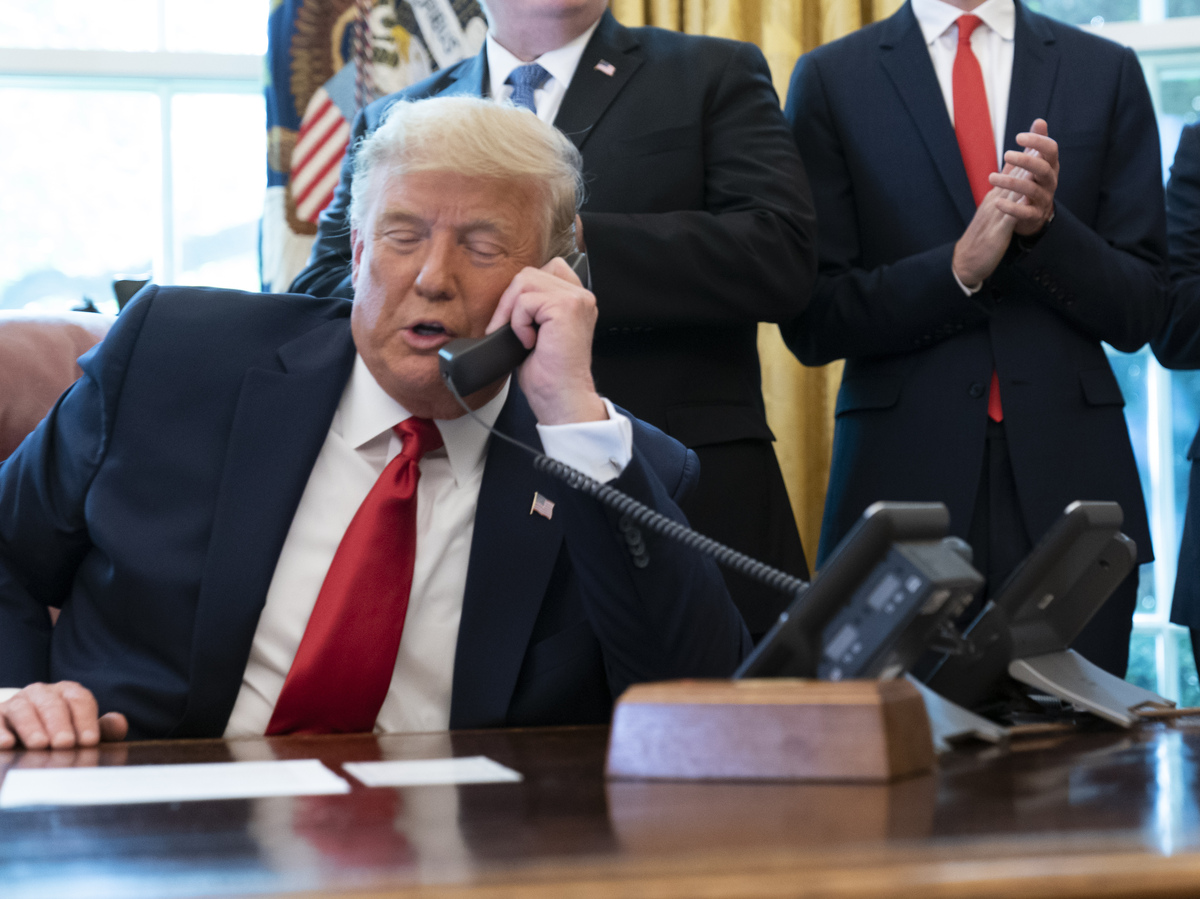 President Trump’s phone call on Saturday with Georgia Secretary of State Brad Raffensperger spurred debates over the call broke the law. Here, Trump talks to the leaders of Israel and Sudan in October.

Depending on whom is asked, President Trump’s Saturday phone call to Georgia Secretary of State Brad Raffensperger â€” during which he urged state officials to “find” votes that could overturn his loss in the state during November’s election â€” may have violated state and federal law.

Trump and White House chief of staff Mark Meadows told Raffensperger they wanted him to track down more than 11,000 ballots to flip the state that went to Biden by nearly 12,000 votes.

Legal experts and former White House officials took to social media through the weekend when news and audio of the phone call between Trump and Raffensperger were released by The Washington Poston Sunday.

Kim Wehle, law professor at the University of Baltimore and author of How to Read the Constitution, told NPR’s Steve Inskeep on Morning Edition Monday that it’s “a crime to request solicit or ask someone else to say falsify returns or falsify reports of votes, and arguably that’s what we heard on the call.”

She added, “Whether this is prosecutable is a different question from whether it’s antithetical to the rule of law and the Constitution and democracy itself, and I would say clearly it is. It’s very disturbing.”

Meadows, who joined Trump on the call, asked state officials to share private election data, protected by law, to help the White House make its case that the election results were fraudulent, a claim that has been disproven repeatedly.

“You would be respected if this thing could be straightened out before the election,” Trump said, referring to Tuesday’s Senate runoffs.

Trump also appeared to indicate to Raffensperger that he may be engaging with other state officials about election results in other parts of the country.

“I mean there’s turmoil in Georgia and other places,” he said. “You’re not the only one, I mean, we have other states that I believe will be flipping to us very shortly.”

Bob Bauer, an election lawyer and senior adviser to President-elect Biden, said Sunday the recording was “irrefutable proof” of Trump’s pressuring and threatening of a Republican official to “rescind a state’s lawful, certified vote count,” according to the Associated Press.

Yet for Trump supporters, it’s Raffensperger and his team who broke the law despite Trump’s legal team repeatedly failing to prove any widespread election law or malfeasance.

David Shafer, chairman of the Georgia Republican Party, claimed Trump, Meadows and Raffensperger were engaged in a confidential settlement conference related to two pending lawsuits the White House filed against Georgia over the election. He argues anything shared in the call was for those purposes.

It’s unclear, however, who sent the recordings to The Washington Post or who originally recorded the phone call.

Mind boggling that @GaSecofState and his lawyers would secretly record and release a confidential settlement conference with the President. I have made open records requests to the Secretary of State which have never been acknowledged or answered. This is lawlessness.

Georgia and Washington, D.C., however, only require that one party on the phone call consent to recording. Eleven states require that all parties consent.

Most of Trump’s detractors on social media said the president’s intentions were clearly to intimidate Georgia officials to change the state’s election results. His critics argue Trump violated a federal law that criminalizes the actions by election officials or by someone in federal office that “knowingly and willfully intimidates, threatens, or coerces” another during the election process.

The federal code also criminalizes actions that “knowingly and willfully deprives, defrauds, or attempts to deprive or defraud the residents of a state of a fair and impartially conducted election process.”

Michael Bromwich, a former inspector general at the Department of Justice, tweeted that Trump’s “best defense would be insanity.”

Unless there are portions of the tape that somehow negate criminal intent, “I just want to find 11,780 votes” and his threats against Raffensperger and his counsel violate 52 U.S. Code Â§ 20511. His best defense would be insanity.https://t.co/ZAtRgiRQmz

University of California-Irvine law professor Rick Hasen wrote in an article in Slate Monday that Trump “likely broke both federal and state law” in the phone call, and that he “certainly committed an impeachable offense that is grounds for removing him from the office he will be vacating in less than three weeks, or disqualifying him from future elected office.”

Richard W. Painter, a professor of corporate law at the University of Minnesota and associate counsel to Republican President George W. Bush agreed, calling for Trump’s impeachment, so he “can never hold public office again.”

However, it is extremely unlikely that the House will attempt another impeachment with so little time remaining in Trump’s term.

“The Georgia code says that anybody who solicits, requests or commands or otherwise attempts to encourage somebody to commit election fraud is guilty of solicitation of election fraud,” Kreis said. ” ‘Soliciting or requesting’ is the key language. The president asked, in no uncertain terms, the secretary of state to invent votes, to create votes that were not there. Not only did he ask for that in terms of just overturning the specific margin that Joe Biden won by, but then said we needed one additional vote to secure victory in Georgia.”

Chris Krebs, the Republican cybersecurity and election security official hired by and then fired by Trump called the president’s actions, “Un-American and anti-democratic.”

He said Sunday, “An incumbent should NEVER be able to put their thumb on the scale of national elections.”