Jan 2, 2021
This post was originally published on this site 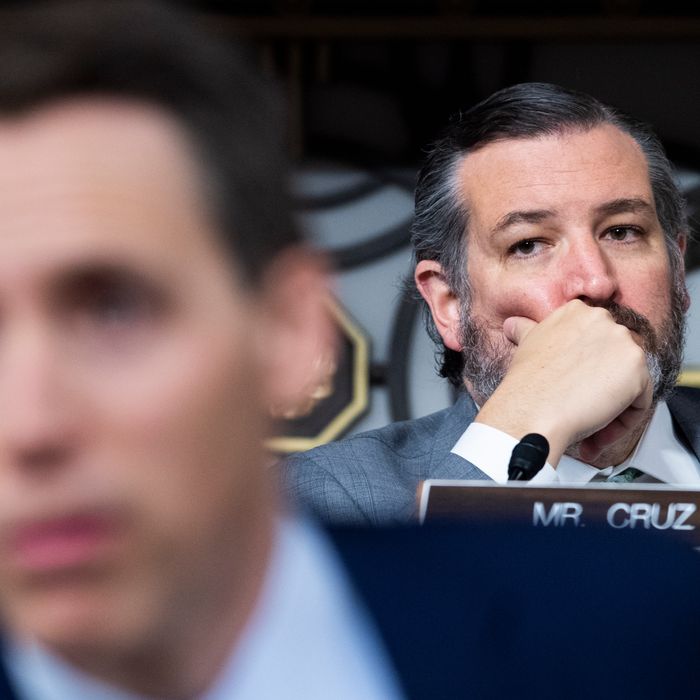 President Trumpâ€™s epic ongoing failure to subvert Americaâ€™s democracy and overturn his unambiguous loss to President-elect Joe Biden gained a whiff of pointless steam on Saturday when 11 Republican senators and senators-elect announced that they will vote against the counting of electoral college votes during a joint session of Congress next week. Missouri senator (and 2024 hopeful) Josh Hawley had already said that he would object to the pro-forma count of electoral votes and confirmation of Bidenâ€™s victory on January 6 â€” which means at least 12 GOP senators and 140 House Republicans will now oppose, for the history books, next weekâ€™s inevitable Congressional confirmation of Bidenâ€™s victory. And Vice President Mike Pence has now come out in support of the ploy, as well.

The 11 senators, led by Texasâ€™ Ted Cruz (who will also likely run for president, again, in 2024), said in a statement that they would support the objection to the count and called for a 10-day audit of election results in â€œdisputed states,â€ asserting that Congress was the â€œlone constitutional power remaining to consider and force resolutionâ€ of the allegations of â€œserious voter fraud.â€ Those false allegations, endlessly promoted by the president since before he even lost, arenâ€™t just baseless, but have failed to gain even the slightest traction in countless courts since the election and were dismissed by Trumpâ€™s attorney general, William Barr, before he resigned last month. Nonetheless, Trump has pressured Republican lawmakers across the nation to demonstrate their loyalty to him and support his attempted coup. And thatâ€™s now exactly what many of them plan to do, futility, precedent, and Democratic principles be damned.

Soon afterwards, Mike Penceâ€™s chief of staff announced that Pence, too, â€œshares the concerns of millions of Americans about voter fraud and irregularities in the last electionâ€ and â€œwelcomes the efforts of members of the House and Senate to use the authority they have under the law to raise objections and bring forward evidence before the Congress and the American people on January 6th.â€

Hawley, whose Senate website says he â€œis recognized as one of the nationâ€™s leading constitutional lawyers,â€ tweeted on Saturday that he is â€œglad to see more Senators joining the fightâ€ and that he hopes â€œmany more will listen to their constituents and act.â€

A Biden spokesperson wrote the whole thing off as a â€œstunt.â€

At best, the objecting Republicans arenâ€™t so much showing fealty to Trump as they are performing it for his supporters, many of whom have bought into the president and his alliesâ€™ false claims about the election being â€œrigged.â€ The 11 senatorsâ€™ statement claimed that their proposed audit of the state-certified election returns would â€œdramatically improve Americansâ€™ faith in our electoral processâ€ and â€œsignificantly enhance the legitimacy of whoever becomes our next President,â€ but thatâ€™s not a realistic outcome, either. They also claimed that were not actually trying to thwart Bidenâ€™s victory and acknowledged that they â€œfully expect most if not all Democrats, and perhaps more than a few Republicans, to vote otherwise.â€

As CNN points out, â€œNot one of the Republican officeholders objecting to Bidenâ€™s victory have objected to their own wins on the same day on the same ballots using the same election systems.â€

Several GOP senators have publicly opposed the scheme. Senate Majority Leader Mitch McConnell, for his part, has unsuccessfully tried to dissuade his colleagues from objecting to the count and forcing the vote â€” which would put vulnerable Republicans up for reelection in 2022 in the politically unenviable position of either voting against Trump or democracy. McConnell even went so far as to reportedly tell Senate Republicans on Friday that his vote to confirm Bidenâ€™s victory â€œwill be the most consequential I have ever cast.â€ Senator Pat Toomey said Saturday that Hawley and Cruzâ€™s effort to â€œoverturn the resultsâ€ of the election â€œdirectly undermines the right [of the people to elect their own leaders.â€ Mitt Romney said in a statement that Cruz et alâ€™s â€œegregious ploy to reject electors may enhance the political ambition of some, but dangerously threatens our Democratic Republic.â€ Lisa Murkowski responded, â€œI swore an oath to support and defend the Constitution of the United States and that is what I will do January 6.â€

There is, in other words, absolutely no chance that this effort to block the count and help the flailing president cling to power will gain majority support in either the Senate of House on Wednesday. What it will accomplish is help cement, in the minds of many Republican voters, the plainly false notion that Donald J. Trump is not a loser.

Daily news about the politics, business, and technology shaping our world.

Pence calls Harris to offer assistance ahead of U.S. power transfer next week