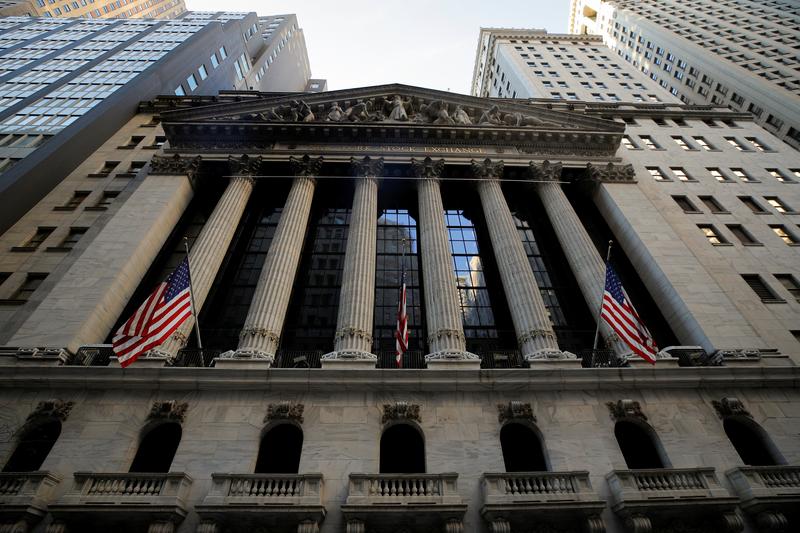 NEW YORK (Reuters) -Wall Street advanced on Thursday and the dollar gained ground as investors closed the book on a turbulent year of pandemic, recession and recovery.

All three major indexes gained ground, with the Dow and S&P 500 picking up steam in the sessionâ€™s final minutes to exit 2020 at record highs. Over the course of a historic year, the indexes both roared and plummeted as economic shutdowns to contain the coronavirus brought markets to their knees.

â€œItâ€™s a quiet day with little news and low volume – an ironic end to such a tumultuous year,â€ said David Carter, chief investment officer at Lenox Wealth Advisors in New York. â€œAll eyes are on next year, which will be â€˜show meâ€™ time, with investors watching to see if actual fundamentals will be as strong as current stock prices are forecasting.â€

Equities bounced back with a vengeance following the plunge in March, with the Nasdaq, S&P 500 and Dow posting respective annual gains of 43.6%, 16.3% and 7.2%.

â€œWhen you think about the year weâ€™re glad itâ€™s over, but it was also unbelievable in a lot of different ways,â€ said Ryan Detrick, senior market strategist at LPL Financial in Charlotte, North Carolina. â€œThis is the first year in history that the S&P was down 30% for the year at one point and managed to end higher.

â€œIt is a good reminder for investors to have a longer time horizon and when bear markets arise they likely should be viewed as opportunities and not a time to panic, which is easier said than done,â€ Detrick added.

Initial jobless claims unexpectedly dropped for the second straight week, according to the Labor Department, but remain elevated as the economy stumbles through a COVID-19 resurgence.

President Donald Trump was expected to fly back to Washington on Thursday to pick up his fight with Congress over a defense bill and stimulus checks.

Nations around the world struggled to deploy vaccines to end the global health crisis. About 2.8 million Americans have been inoculated so far, falling well short of the year-end goal of 20 million.

Worldwide, deaths from COVID-19 here have surpassed 1.8 million. In the United States, more than 340,000 have died from the disease.

European stocks closed lower as tighter coronavirus restrictions in the UK and higher U.S. tariffs on some EU products dampened optimism on the last day of the Brexit transition.

The dollar rose against a basket of world currencies, but ended its worst year since 2017 as expectations for further fiscal aid and easy monetary policy from the U.S Federal Reserve prompted investors to shun the greenback.

Gold prices gained as safe-haven metal notched its best year in a decade due to economic uncertainties caused by the pandemic.