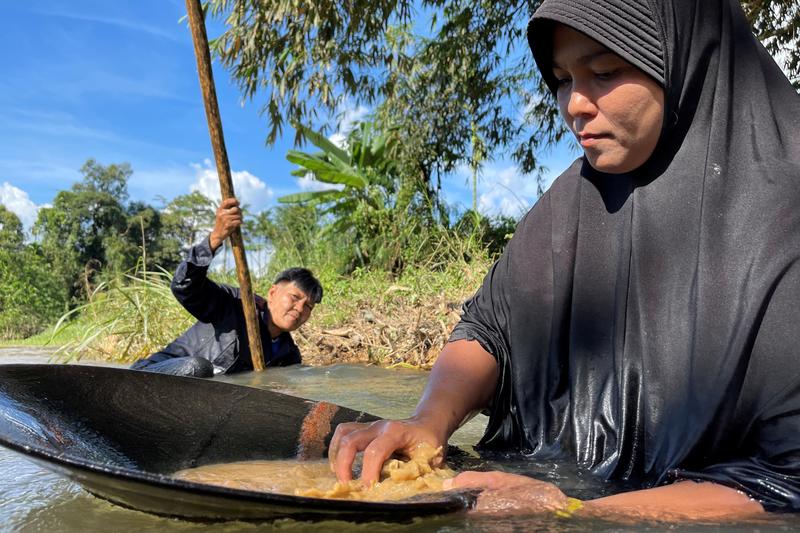 SUHKHIRIN, Thailand (Reuters) – As the yellowish mud swirls away in the waters of Thailandâ€™s Sai Buri river, Sunisa Srisuwanno lifts her wooden pan with a cluster of gleaming specks caught in the centre.

â€œThatâ€™s 100 baht,â€ she said, pointing to grains worth about $3.30 after little more than 15 minutes work with her gold panning partner, Boonsom Aeamprasert.

With global gold prices near an all-time high, the women are a rare bright spot for an economy hard hit by the collapse of tourism amid coronavirus travel restrictions.

â€œThe gold panning business is doing well, especially during COVID-19,â€ said Sunisa, a 37-year-old mother of two. â€œPanning gold is our main staple. We sell gold today, we are able to buy food to feed the family.â€

The areaâ€™s name – Gold Mountain – indicates that mining has gone on longer than anyone can remember in Sukhirin District, on Thailandâ€™s southern border with Malaysia.

But it has been made more lucrative by rising gold prices, up nearly a quarter over the past year.

The rest of Thailandâ€™s economy is suffering, with the central bank forecasting a 6.6% contraction this year.

Thailandâ€™s deep south, scene of a decades-old Muslim separatist insurgency, lacks the beach resorts, nightlife or temples that draw so many tourists to the country.

But visitors who come to Sukhirin for hiking, kayaking and wildlife are still an important income source – at least until the pandemic struck.

â€œAs the community was forced to shut down the attractions, we had to switch from welcoming tourists to digging and sifting for gold,â€ said Wari Bantakit, 40, who works for a community tourism group.

Some gold sifters use just a shovel, a pan and a plastic squeezy bottle to suck up the grains – and the occasional nugget. Others try to find the best prospects by scrabbling underwater with a snorkel mask.

There are men among the gold panners, but miners said the draw of gold is particularly appealing for women. Men traditionally gather wood and forage in the forests.

â€œHousewives who used to sell stuff, vegetables, food to tourists were forced to stop,â€ said Wari. â€œThey had to turn to gold panning. Itâ€™s become the main job.â€