Stocks hold on to modest gains, marking another Dow record 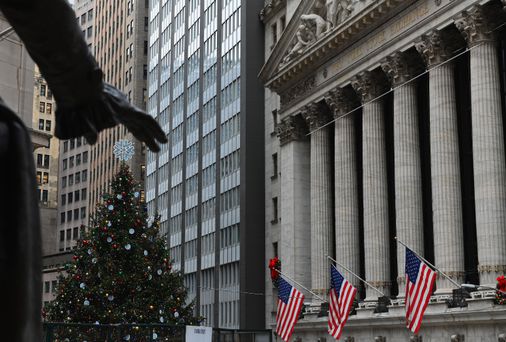 Small-company stocks again outpaced their larger rivals, a sign that investors are feeling more optimistic about the economy.

Stocks have been mostly grinding higher in recent weeks, with indexes setting new highs, amid optimism that coronavirus vaccinations will pave the way in coming months for the economy to escape from the pandemicâ€™s grip.

â€œThis is overall a market thatâ€™s setting the stage for 2021 and looking at an economy that is going to normalize, albeit at a probably slower pace than initially projected,â€ said Quincy Krosby, chief market strategist at Prudential Financial.

The modest gains came as the effort to develop and distribute vaccines to fight the virus pandemic intensifies. Britain has authorized the use of a COVID-19 vaccine developed by AstraZeneca and Oxford University. The vaccine is considered easier to store and handle than others hitting the market. Earlier in December, both the U.K. and US approved a vaccine made by Pfizer.

Investors are optimistic about more vaccines gaining approval and reaching the market in coming weeks, though the potential for problems with their distribution remains a concern, said Ryan Detrick, chief market strategist for LPL Financial.

â€œThe hiccups are the actual rollout,â€ he said. â€œApproving them is one thing, but getting them out and into peopleâ€™s arms is another thing.â€

Treasury yields were mostly lower. The yield on the 10-year Treasury slipped to 0.92 percent from 0.93 percent late Tuesday.

Stock markets in Europe closed lower after European Union officials and British lawmakers approved a separation deal that will govern trade and other relations after the year ends. The U.K. left the EU almost a year ago, but remained within the blocâ€™s economic embrace during a transition period that ends this year.

Markets in Asia closed mostly higher, though Japanâ€™s Nikkei fell 0.5 percent as the Tokyo exchange marked the end of trading for the year.

Traders in cryptocurrencies continued to push up the price of bitcoin, which has more than doubled the past three months. It rose 5.4 percent to $28,635, according to the tracking site CoinDesk. Bitcoin futures on the Chicago Mercantile Exchange climbed 6.5 percent to $28,970. The futures allow investors to make bets on the future price of the digital currency.

Trading volume on Wall Street has been thin in the final week of 2020. The market will be closed for New Yearâ€™s Day Friday.