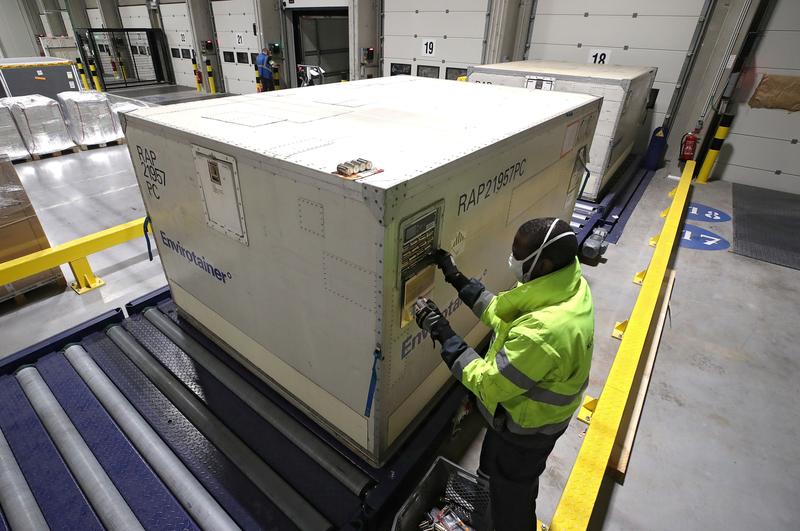 ZURICH (Reuters) – Joern Schneemann thought he would be helping manage logistics for the Tokyo 2020 Olympics this year. Then, the COVID-19 crisis intervened, pushing the event back to 2021.

Instead, the head of Swiss logistics company Kuehne + Nagelâ€™s European Expo & Events unit has been setting up vaccination centres in convention and sporting venues in Germanyâ€™s North Rhine-Westphalia state, the nationâ€™s most-populous with 18 million residents.

â€œBecause of the pandemic, things turned out quite differently than we had planned,â€ Schneemann told Reuters from his German offices. â€œAnd it turned out well.â€

Neither North Rhine-Westphalia, which kicks off its vaccination programme in nursing homes on Sunday in line with the rest of Germany, nor Kuehne + Nagel disclosed the contractâ€™s value.

The company, which has secured other, undisclosed government contracts, will manage the rollout of millions of vaccines including Pfizer and German partner BioNTechâ€™s, which won European approval on Monday.

It must coordinate deliveries to halls filled with refrigerated containers that can handle the vaccineâ€™s minus 70 degrees Celsius storage requirement at 53 sites around the state.

Europe is due to get 12.5 million doses of the Pfizer/BioNTech vaccine by Dec. 31, with Germany expecting up to 4 million doses through January, enough to inoculate 2 million people with the two-shot treatment.

Rival Deutsche Post DHL has secured similar contracts in Lower Saxony and Baden-Wuerttemberg states to store and deliver part of the first tranche of the 300 million potential doses Germany has ordered.

In general, the shippers have survived the pandemic in good shape after online sales soared during lockdowns.

Kuehne + Nagelâ€™s third-quarter profit easily beat expectations, DSV called market conditions â€œbetter than anticipatedâ€, and Deutsche Post DHL, which is also delivering COVID-19 vaccines to Israel, is benefiting from a fresh surge in ecommerce in the run up to Christmas.

Billions of doses are needed to inoculate the world over the next 12-24 months but COVID-19 shots will still make up only a fraction of global shippersâ€™ volumes in 2021.

And they are optimistic about the ability of logistics networks to handle the load, despite major challenges like the Antarctic chilling demands of Pfizer/BioNTechâ€™s shot, deliveries of which are also underway in the United States, Britain, Switzerland and parts of the Middle East.

Geneva-based global trucking organisation the International Road Transport Union (IRU) estimates 8 billion vaccine doses could be moved by fewer than 100,000 truck transports, or less than 0.00001% of the annual total.

Still, delivery of COVID-19 vaccines may yet give a boost to airlines where passenger numbers have collapsed, as they augment cargo fleets or re-purpose idled passenger jets.

While shippers like U.S.-based FedEx and UPS that can move smaller volumes quickly may have an advantage during the 70-million-dose rollout projected in 2020 for vaccines from Pfizer/BioNTech and Moderna, DSV Panalpina is counting on deliveries accelerating next year.

â€œDSV will only become active in the distribution around April, when mass roll-out starts,â€ the Copenhagen-based shipper said.

Pfizer and Moderna predict 1.8 billion-plus doses come 2021, with other vaccine developers hoping to add to that if their candidates get approved, as expected.

Kuehne + Nagelâ€™s distribution is based in Liege, Belgium, where it is readying its European vaccines hub.

From here, shots will be trucked to Europe or loaded onto cargo planes, or â€œfreightersâ€, at nearby airports for long-haul journeys to places like Africa which will get vaccines under humanitarian programmes.

â€œWe can send a freighter out and hit four or five of those countries in milk run-type fashion back into Liege,â€ said Rob Coyle, Kuehne + Nagelâ€™s pharmaceuticals logistics business head.

For 11 billion vaccine doses, Coyle estimates 5,000-6,500 trucks or roughly 1,000 large freighters would be needed. While some types of transport will get busy, shippers can manage volumes as vaccines roll out, Coyle said.

â€œOther industries, aerospace, automotive, theyâ€™ve got less volumes,â€ Coyle said. â€œWeâ€™re already having conversations with air carriers, to pull some of their airplanes out, if we need (to).â€

Reporting by John Miller in Zurich, Jacob Gronholt-Pedersen in Copenhagen and Matthias Inverardi and Tom Kaeckenhoff in Duesseldorf; Editing by Kirsten Donovan