A perfect storm has pitched the UK economy into troubled waters 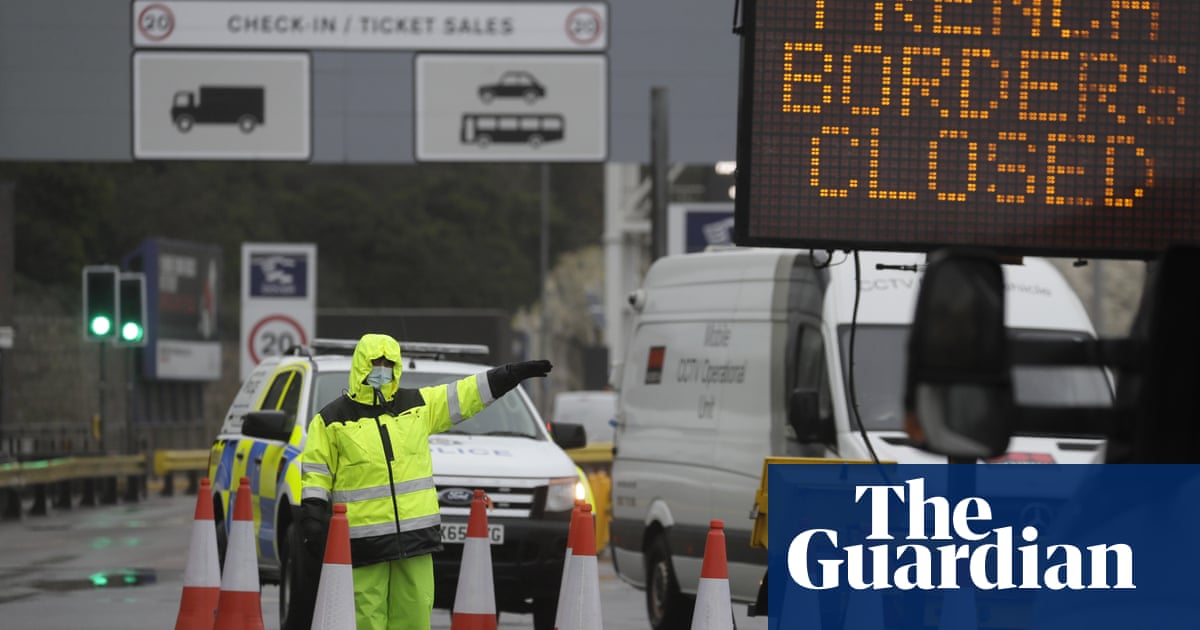 Britainâ€™s economy is suffering increasing damage from the rapid growth in Covid infections, renewed lockdown measures, and turmoil over Brexit at the end of the worst year for growth in three centuries, according to a Guardian analysis.

With negotiations going down to the wire amid vast tailbacks at Dover before the Brexit transition expires on New Yearâ€™s Eve, the latest figures from the UK economy show stalling growth, falling retail sales, and redundancies rising at the fastest rate since records began.

In a month that started with a burst of optimism as a British woman became the first patient in the world to receive the coronavirus vaccine, December is ending with the pandemic surging to a fresh peak and Boris Johnsonâ€™s government imposing tougher lockdown measures before Christmas.

To counter the emergence of a faster-spreading Covid variant in the UK, and as Brexit talks intensify, the French ban on freight movements has led to chaos in Kent days before a no-deal Brexit could trigger renewed turmoil.

Official figures had shown the British economy recovered from lockdown this spring at a faster rate than first anticipated, amid hopes that a vaccine could bring an early end to the crisis.

However, economists now forecast a double-dip recession and tougher lockdowns lasting into 2021 before the vaccine can be rolled out widely enough. David Blanchflower, a former member of the Bank of Englandâ€™s rate-setting monetary policy committee, said Brexit â€“ with or without a trade deal with Brussels â€“ would hit an already weak UK economy at the start of next year.

Writing in the Guardian, he said: â€œIt does seem to me to be the worst decision in peacetime any country in the world has made in a thousand years. Lines of lorries at Dover and Folkestone do not augur well for what is to come, even before Boris Johnson cancelled Christmas.â€

Since the onset of the pandemic, the Guardian has chosen eight economic indicators, as well as the level of the FTSE 100, to track the impact on jobs and growth from Covid-19 and the measures used to contain it. Faced with the deepest global recession since the Great Depression, the Covid crisis watch also monitors how the UK is faring compared with other countries.

In the past month, there have been some bright spots for the economy, including a recovery in business activity in early December after the second national lockdown in England. Tougher restrictions in the autumn appear to have had less of an impact on growth and jobs than during the first wave of the pandemic.

Official figures show Britainâ€™s economy staged a faster recovery in the third quarter of the year than was first estimated, after a rapid return to work after the first lockdown.

However, official growth figures also show the economy started sinking towards a double-dip recession even before Covid restrictions were reimposed in November. The Bank of England has warned the economy will shrink in the final months of 2020 and could remain weaker than expected at the start of 2021, as controls are kept in place to handle rising infections before the Covid vaccine can be rolled out widely.

In response to the renewed period of economic pain, the chancellor, Rishi Sunak, unexpectedly extended the furlough scheme until the end of April, a month longer than planned. Use of the flagship wage subsidy programme, which has cost the government almost Â£50bn so far, doubled in November to about 5 million workers, reflects the intense pressure facing companies.

Sunak announced plans to hold a budget on 3 March to set out the next stage of the governmentâ€™s economic response to the pandemic. However, business groups and Labour have warned additional support is required to support firms and workers during a period of extended lockdown restrictions.

The number of people being made redundant reached a record high in October, at a time when the government was winding down furlough before a last-minute U-turn to extend the scheme. Unemployment is expected to hit 2.6 million next year when the scheme ends.

Blanchflower said: â€œThe issue is whether these jobs â€“ many in pubs, clubs and restaurants â€“ return after the furlough payments stop. But many jobs wonâ€™t return, if there are long-run changes in behaviour after the pandemic as expected.â€